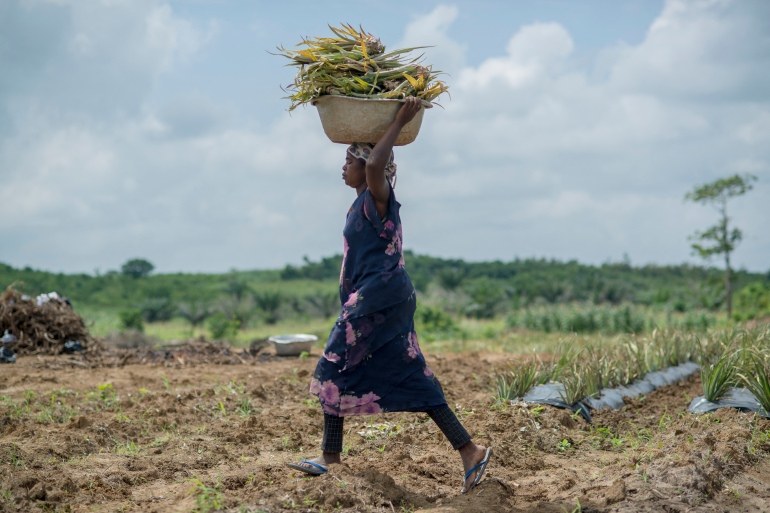 With the passing of the United Nations’ highly contested Food Systems Summit last month, the task of “feeding the world” has taken on a newfound urgency.

But one point apparently lost on the summit’s attendees is that the project of “agricultural modernisation” which many of them have supported for decades is only making food insecurity worse in recent years, especially in Africa.

Since the 2007-08 world food price crisis, Western governments and philanthropies, led by the United States and the Gates Foundation, have backed a multitude of programmes across the continent to raise farmers’ productivity and connect them to commercial supply chains. Together, these efforts carry the banner of an “African Green Revolution” – an approach not unlike the primarily Asian and Latin American Green Revolution before it.

But at the heart of this massive philanthropic and governmental undertaking lies an essential contradiction: agricultural “modernisation”, we are told, will benefit Africa’s smallholder farmers by giving advantages to farmer-entrepreneurs with larger landholdings. The result is a “revolution” ostensibly meant to help the poor which actually makes rural life difficult for anyone but the most well-off, well-connected, commercially-oriented, and “efficient” business people.

In our research, we have both encountered the reality of the African Green Revolution in Ghana, a country that has experienced a surge in agricultural foreign aid in recent years.

As geography professors Hanson Nyantakyi-Frimpong and Rachel Bezner Kerr have mentioned in their 2015 paper, British colonialists developed production and market systems to extract cocoa – a crop not widely consumed in the country but which continues to attract significant investment and subsidies today. In the post-colonial period of the 1960s and 1970s, the government of Ghana, with support from Western government donors, introduced high-yielding varieties of rice and maize, as well as imported chemical fertilisers.

In a 2011 paper, University of Ghana professor and anthropologist Kojo Amanor also explains, that from 1986 to 2003, Sasakawa Global 2000, a development organisation founded by Japanese industrialist Ryoichi Sasakawa and Norman Borlaug, the initiator

Sasakawa Global 2000 found many farmers willing to accept their assistance. But according to Amanor, many of the farmers who initially adopted the technology reverted to traditional practices and local seed varieties after the project concluded. Even after years of working in rural Ghana, the organisation saw only a 45 percent recovery in crop investment.

These days, there are many reasons why smallholders do not cooperate with the “modernisation” programmes of the African Green Revolution. In their 2015 study, Nyantakyi-Frimpong and Bezner Kerr found that smallholder farmers often preferred to plant their own maize varieties, even when government and development organisations made more “advanced” hybrids available.

As the farmers understood well, their own hardier, local varieties of maize were more resistant to drought, required less labour, cost less, and required little or no chemical fertiliser. Moreover, unlike hybrids, whose wide leaves obstruct the sun for neighbouring plants, farmers could plant their own maize varieties alongside peanuts, cowpea, and bambara beans – all nutritious crops well adapted to the local ecology.

Development planners have long touted technologies like hybrid seeds as “solutions” to the many problems resulting from climate change, and it is true farmers sometimes turn to them in their struggle to adapt to unpredictable ecological conditions. In one study, one of us found that many smallholders in an area of northern Ghana reluctantly

turned to those technologies in a desperate gambit to adapt to increasingly erratic rainfall, shortening growing seasons and drier, less fertile soils.

But beyond climate change, farmers have also adopted technology to deal with the problems induced by the African Green Revolution itself, such as increasing competition for land, as local businessmen (and they are overwhelmingly men) acquire farms to capitalise on the very programmes supposedly meant to help smallholders.

Despite the apparent need for more technology, smallholders find themselves trapped in a vicious cycle, sacrificing tomorrow’s soil for today’s planting. While even some of the poorest farmers in Ghana rely on chemical fertiliser to grow enough food to survive, a number of farmers said their soils were infertile without ever-larger doses of chemicals. Or as some put it, the land was “addicted to chemicals”. This dependency increased their debt and their risk of land dispossession, particularly for women.

Far from levelling the playing field so that any farmer can succeed, the emphasis on expensive technology and commercial access has only made it harder for smallholder farmers to survive in their native lands, while opening the door to local businessmen who see in the African Green Revolution their own investment opportunity. As one farmer said, “[donors] are supposed to help, but what do we see? […] you see big cars. This district executive wants 50 acres, the party head wants 100 acres.”

As another put it, development workers “treat farmers like they are so stupid”.

Even at the smallest scale, farming is more than a livelihood. Studies show that a major share of the world’s food is grown by smallholder farmers. Yet many critical agrarian thinkers like Henry Bernstein have argued that smallholder farming is becoming increasingly difficult, and even impossible in some places. Developmental aid that largely goes to the agri-food companies and well-capitalised businessmen, while smallholders lose the very farmland they need to survive, is undoubtedly one of the underlying causes of this phenomenon.

It is tempting to think of mass displacement as an unforeseen consequence of the African Green Revolution. But displacement and marginalisation were always bound to result from an effort that rarely envisions smallholders as anything more than a component in a supply chain managed by other, more powerful actors.

In Ghana, several organisations, including World Vision, the Gates-funded Alliance for a Green Revolution in Africa, and the World Bank have empowered relatively well-off business people to provide assistance to farmers that the state once provided. As part of one project we researched, USAID supported a group of relatively well-off “nucleus farmers” to distribute seeds and facilitate the occasional service of a tractor for smallholders in exchange for a portion of their crop. The aid agency and its contractor said the multi-year project, which ended in 2020, directly involved tens of thousands of impoverished farmers in an effort to modernise one of the country’s agricultural processing chains.

But when one of us travelled to Ghana in 2016 and asked some of the nucleus farmers how they dealt with smallholders who, despite the assistance, could not grow enough soy to compensate them, these agro-entrepreneurs revealed a darker side to the programme. At their direction, struggling smallholder farmers borrowed money from local banks to buy snacks to sell by the roadside to pay off the debt. When a farmer repeatedly failed to grow sufficient amounts of the crop, one nucleus farmer said, he instructed the farmer to let someone else take over their plot for the rest of the season. While some returned the next season, many did not.

When asked about these outcomes, one executive for the development contractor managing the programme deferred to a standard refrain. Nucleus farmers were “independent businesses” and how they dealt with farmers was none of their concern. But the fact that smallholder farmers in Africa were leaving their farms was no reason for concern.

“That’s an evolutionary process,” this person said. “I don’t think that’s anything anyone is trying to counter.”

Proponents of a Green Revolution in Africa often employ justifications like these when confronted with unflattering stories about rural life in Africa: smallholders are leaving the countryside, but that is their choice. And if it is not their choice, their departure is only part of a natural process outside anyone’s control. In any case, when smallholders drop their hoes and head to the nearest city, they are only doing so to find a better livelihood.

But among like-minded people, enthusiasts will often make their position on rural depopulation quite clear. Speaking to an audience that included several African heads of state and numerous development contractors in Kigali, Rwanda, in 2018, Rockefeller Foundation President Rajiv Shah – one of the most prominent supporters of the African Green Revolution – had this to say: “A uniquely African agricultural revolution

was meant to beat hunger by making food more available and accessible. But this revolution was also meant to create a diversified, modern economy, where food production no longer dominated how nations deployed the majority of their labour.”

Like other development planners who cheer the collapse of smallholder agriculture in Africa, Shah – who previously headed USAID under the Obama administration and the Gates Foundation’s agriculture programme – did not acknowledge some of the bleaker consequences of this population shift: growing slums and joblessness in Africa’s cities (and the cities of other continents), rising food insecurity, and a growing reliance on monocultures and other environmentally destructive farming techniques in rural areas.

Instead, he went on to say that from 2003 to 2018, sub-Saharan Africa’s population had increased from 700 million to over a billion people, while the proportion of people working in farming on the continent had fallen from 65 percent to 57 percent.

“Real progress,” he said. “But the eight-point drop over 15 years in the share of labour employed in agriculture is simply too small to celebrate.”

In other words, a mass displacement of smallholder farmers is not a natural process or a side-effect of the African Green Revolution. It is exactly the outcome development planners want and expect.

As the many grassroots organisations representing smallholder farmers in Africa and around the world understand, this story is fundamentally about who deserves to farm and reap the rewards from Africa’s farmland. It is one reason why so many of them boycotted the Food Systems Summit in September. But to succeed, groups standing up for smallholders will have to continue on many other fronts.

We call on activists to continue to speak the truth about the Green Revolution in Africa, and to take a stand against the donors, philanthropists, diplomats and academics promoting it. Let us call out actors that claim to help smallholders, but actually strive to kick smallholders off their land.