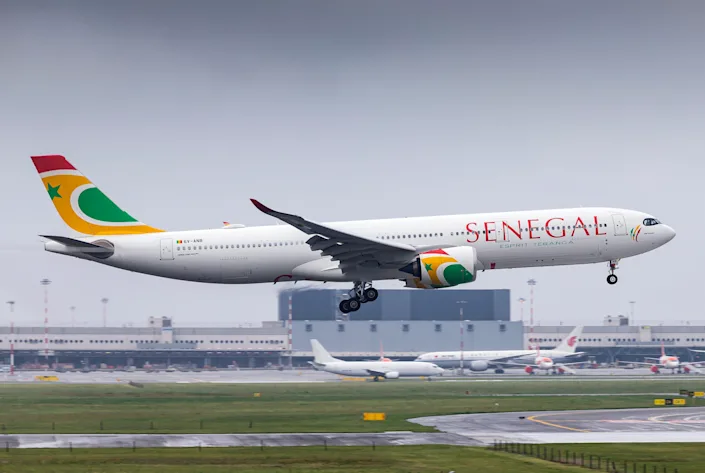 Air Senegal has launched service between its country’s capital of Dakar to Baltimore in the US.

The route will run with a layover in New York, but most Americans can’t fly on the domestic leg.

One of Airbus’ newest wide-body jets, the A330-900neo, will operate the route.

The African airline Air Senegal launched flights from its capital of Dakar to Baltimore on Thursday. The unique route includes a layover in New York before continuing on to Baltimore, but most Americans cannot fly the domestic leg.

As of September 2, Air Senegal will fly twice weekly between its country’s capital of Dakar to Baltimore in the US.

The route will operate on Thursdays and Sundays and include a short layover at New York’s John F. Kennedy Airport in both directions, according to the airline. Here’s the schedule (all times are local):

Passengers who fly Air Senegal between Baltimore and Dakar will have to spend two to two and a half hours in New York in each direction, meaning Air Senegal is tapping into its Eighth Freedom rights.

According to the International Civil Aviation Organization, the Eighth Freedom of the Air gives a carrier the right to transport passengers between two cities in one territory as long as the entire service originates or terminates in the foreign airline’s parent country. The domestic leg is known as a “tag” flight.

In the case of Air Senegal, the hop between New York and Baltimore is legal as long as the airline carries only travelers who either originate or are destined for Dakar. Passengers who want to fly domestically between the two cities will not be able to book a ticket on the carrier.

“We are pleased to announce and celebrate this new service from Senegal by our newest international airline Air Senegal,” the Baltimore airport’s executive director, Ricky Smith, said at a welcome ceremony. “This new air service that we celebrate today is an example of the strength of Maryland and the success of our entire national capital region.”

According to Air Senegal, it will run the route using one of Airbus’ newest jets, the A330-900neo, configured with 32 business-class seats, 21 premium-economy seats, and 237 economy seats. The aircraft can carry up to 12 tons of freight, according to the airline, which is keen on boosting its cargo business between Senegal and the US.

In a press release, Air Senegal explained the benefits of operating out of Baltimore versus Washington Dulles International Airport. Specifically, the airport is situated close to a majority of the West African population in the greater Washington-Baltimore metropolitan area and offers easy connectivity to the US capital and other cities in the country via Amtrak or Southwest Airlines, which has a base in Baltimore.

The New York-Dakar route is in direct competition with Delta Air Lines, which flies between JFK and Dakar on Mondays, Wednesdays, and Fridays.