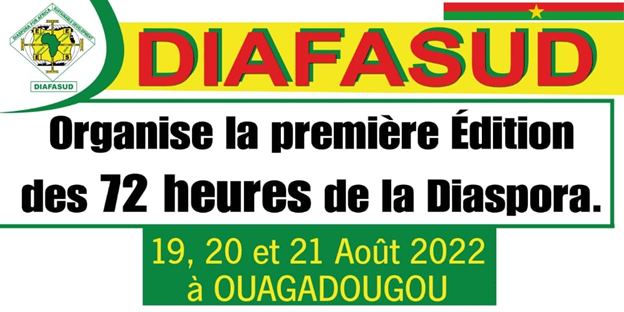 The Founder President  of a new non-for-profit organization called  Diaspora for African Sustainable Development (DIAFASUD)  has held on October 23, 2021  in Ouagadougou , Burkina Faso a press conference  as a kick off of the organization’s  activities. He was surrounded by all  the staff including the general coordinator and country representative of DIAFASUD in Burkina Faso.

“It is about to introduce the organization to the public,” said Issifou Ouédraogo Founder  President of DIAFASUD, which was created in  2017 in New York ( USA) and legally recognized in Burkina Faso in February 2021.

For Mr. Ouédraogo “ DIAFASUD is a panafrican organization that gives an opportunity to African diaspora to endow in several sustainable development programs in Africa, such as  education, health, environment , social and economic development.”

The press conference was also about to inform the public about the “72 hours” of the diaspora, which will be held on August 19, 20, and 21, 2022  in Ouagadougou. There will be many activities during those 72 hours, such as “diaspora night,” in which the best local projects and the best  businessmen and women  will be honored. There will be sport as well such as “diaspora cup” and many more other activities.

“DIAFASUD will create a safe and secure environment that will bring in Africa more money, knowledge and professional experiences to boost African economy, to create jobs, and to finance major  projects,” said Saibata Sawadogo general  coordinator and country representative. “Raising the public awareness, and educating  the same public contribute to  the functioning of the nation and result to the increase of the tax base,” she added.

Bakary Koné, technical advisor to the Minister Delegate of the Burkina Faso’s  Ministry of Foreign Affairs, Cooperation, African Integration and Burkinabè Abroad, representing the Minister of the so – called  ministry, was the host.

Although DIAFASUD has launched its activities in Burkina Faso, the organization will work in several African countries as well as in the USA. “ There will be activities in the USA and anywhere else, said Issifou Ouédraogo. “Burkina Faso and Africa are targeted for concrete actions.”

NB: Read the same article in our French version