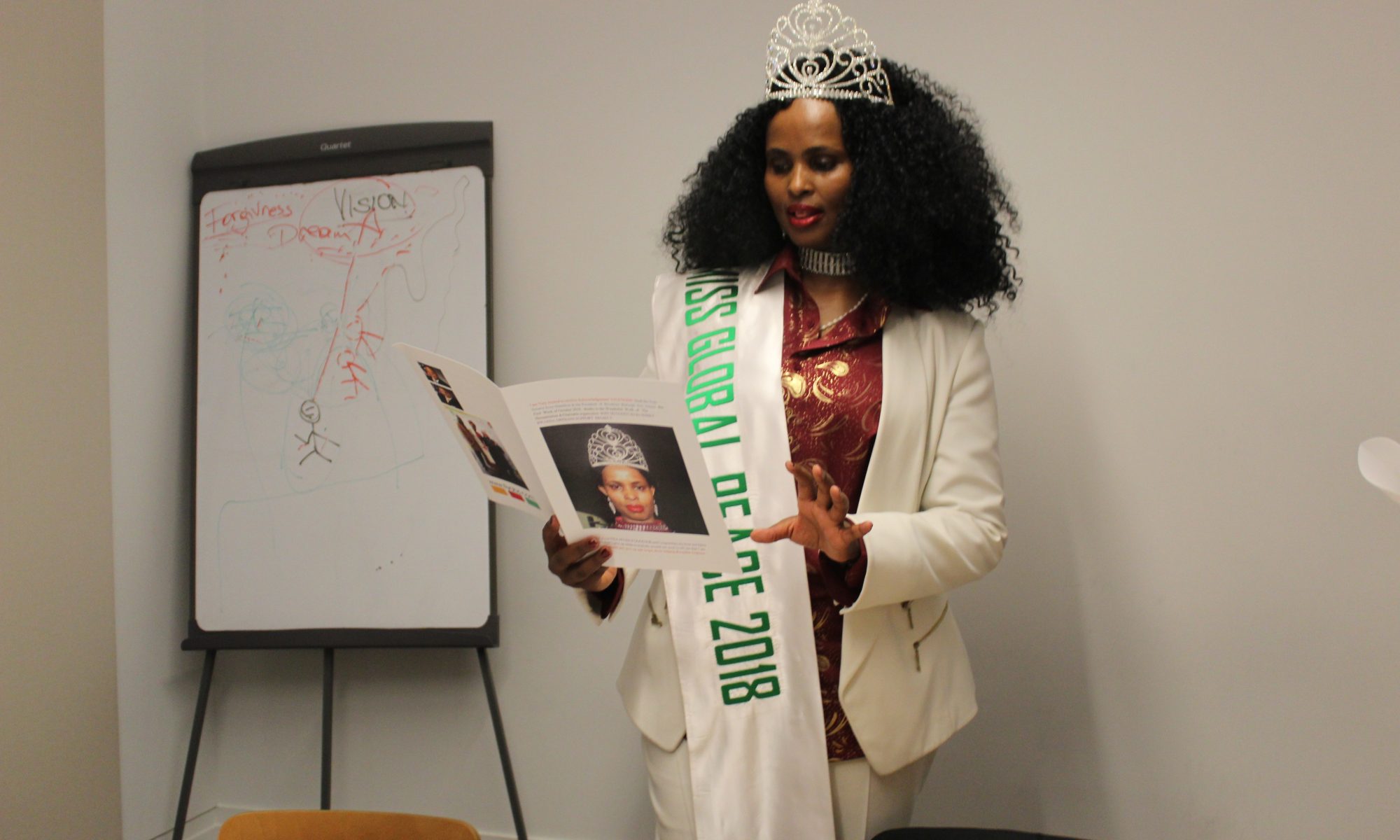 She was a little girl  in 1990 when  in Rwanda her native country, erupted a civil war, which sparked the death of thousands of people. She is a survivor of the genocide in Rwanda in 1994 when  she found herself jumping over hundreds of corpses to save her life. Today she raised up from the darkness of a horrible war to a spotlight of a recognition.

The State Senator Jesse Hamilton and the President of Brooklyn Borough Eric Adams honored Dr. Marie Claudine Mukamabano trough Citation for her an “outstanding commitment to promoting excellence and providing outstanding services and support to residents and those in need.” 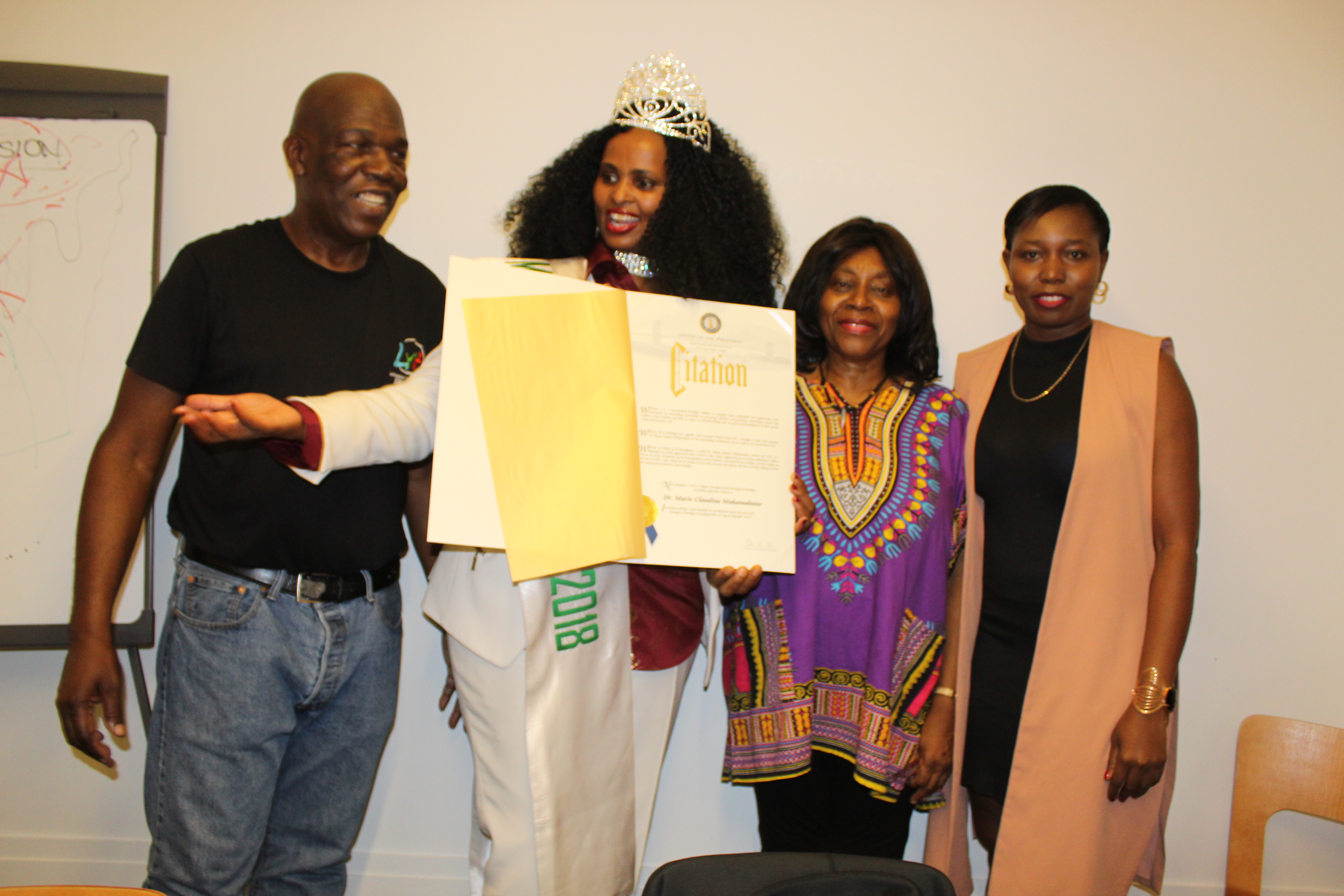 The ceremony was held in October 5, 2018 at the Brooklyn library before close friends who came to support and congratulate her for her accomplishment.

Her story began in 1990 in Rwanda where a civil war between a minority group (Tutsi) and the majority group (Hutu) broke up and approximately 800, 000 Tutsis and moderates Hutus were slaughtered.

Ms. Mukamabano who belongs to Tutsi ethnic group was a little girl. She was 14 – years – old. Her mother was among the dead people.

The other aftermath of that war, was that over 100 days, 100,000 children were orphaned, abducted or abandoned.  Ms. Mukamabano is one of them.

“When I found myself jumping over the bodies of people without knowing where I was running to, I had no idea how I was going to survive, I was thinking that I should die like everybody else,” she said. 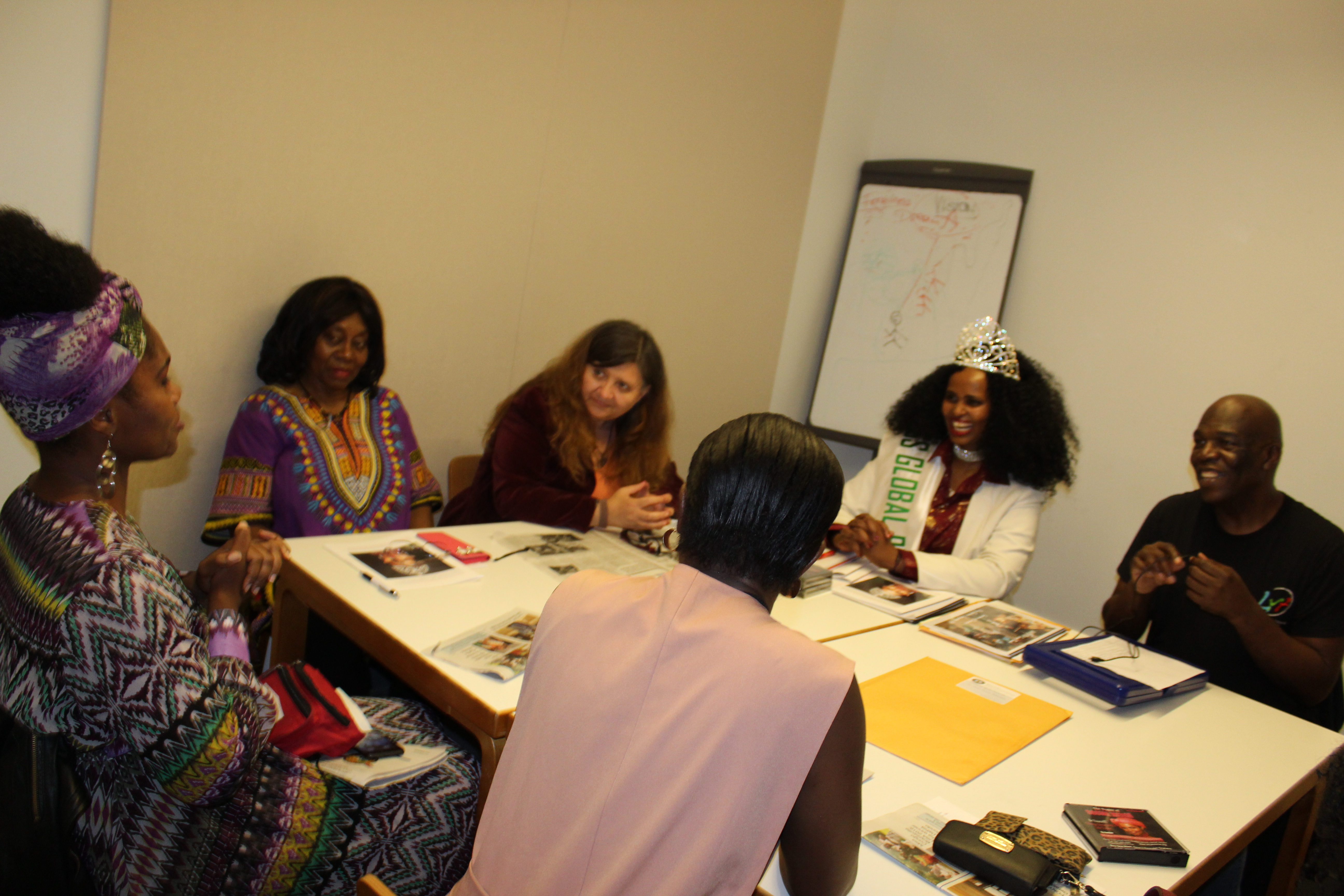 As a survivor of a genocide, she decided to make a vow to God to help orphans in Rwanda if God protects her life. And God she believes in, answers her prayers. In 2005 she created a charitable organization to help orphans who are living in Rwanda. The name of that organization is “Kuki Ndiho” and in English “Why Do I Exist?”

With a broad smile she received her certificate from the hands of Claudius Phillips CEO of Lancaster Youth Forum PA, and in which it is stating: “Whereas, on behalf of all Brooklynites, I salute Dr. Marie Claudine Mukamabano, founder and CEO of a Rwanda non – profit organization that is based in New York. I applaud her for receiving confirmation with a Doctor of letters; and I thank her for all that humanitarian work in Africa; I commend her for making a positive impact on the lives of others; and I thank her for all that she has done to touch and improve the lives of many, helping to move or community forward as one Brooklyn.” 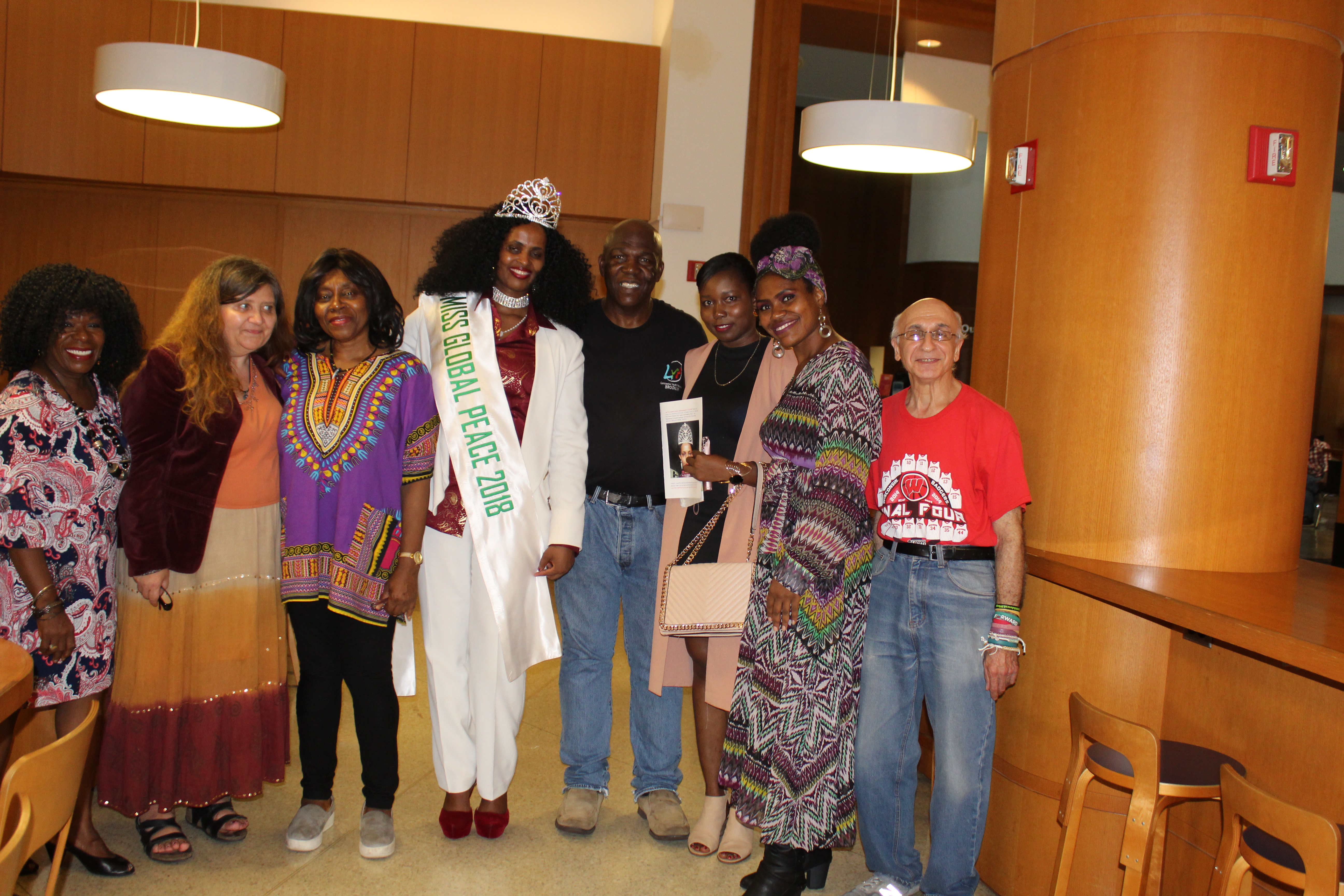 It was really a big day for Ms. Mukamabano as an orphan who used to live at a time in a refugee camp in Africa. She refused to give up her project as she struggled to collect money to rescue Rwanda’s orphans.

“Because life is not easy in America, my closet Rwanda friends here in America used to tell me that I should leave Rwanda orphans to the government of Rwanda,” she recalled. “I told them, that I must fulfill and honor my own person promise I vowed to God during the genocide in Rwanda.”

“She comes along way, this is just the beginning,” Madeline Akibo – Betts a friend of Ms. Mukamabano, said. 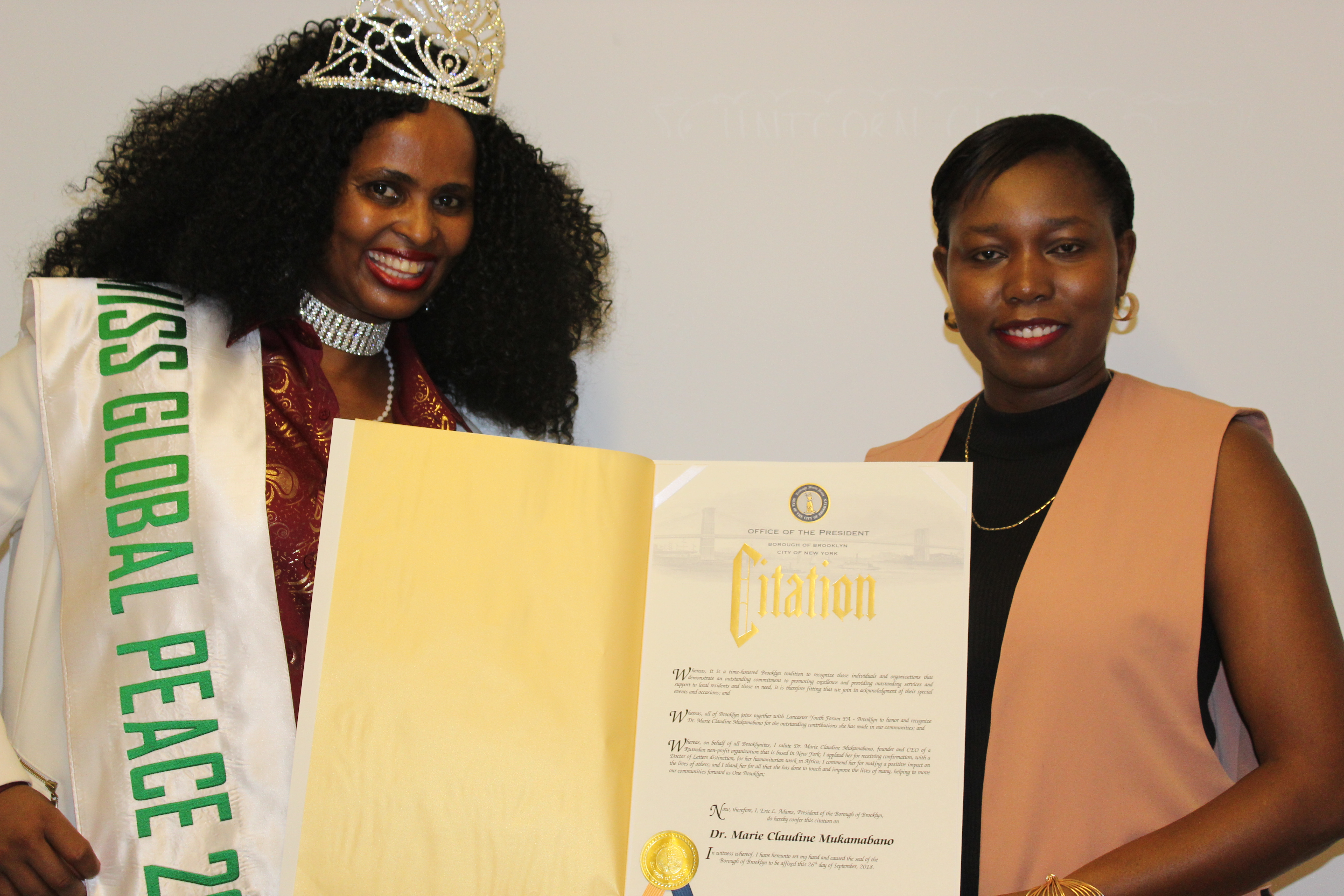 For Stephanie Hien another friend of Ms. Mukamabano, and who is promoting a non-profit organization, “Farafina Mousso”in English “The African Woman,” Marie Claudine is a model to follow.

Ms. Mukamabano is also Miss Global Peace and CNN nominee. She said she has forgiven. Before she received her honor certificate she took about 10 minutes to talk about forgiveness and vision. For her, we cannot succeed in our vision if we do not forgive.

“You have to go through tribulations to reach out your dream because people will try to sabotage you,” she said. “If you forgive you move up.”