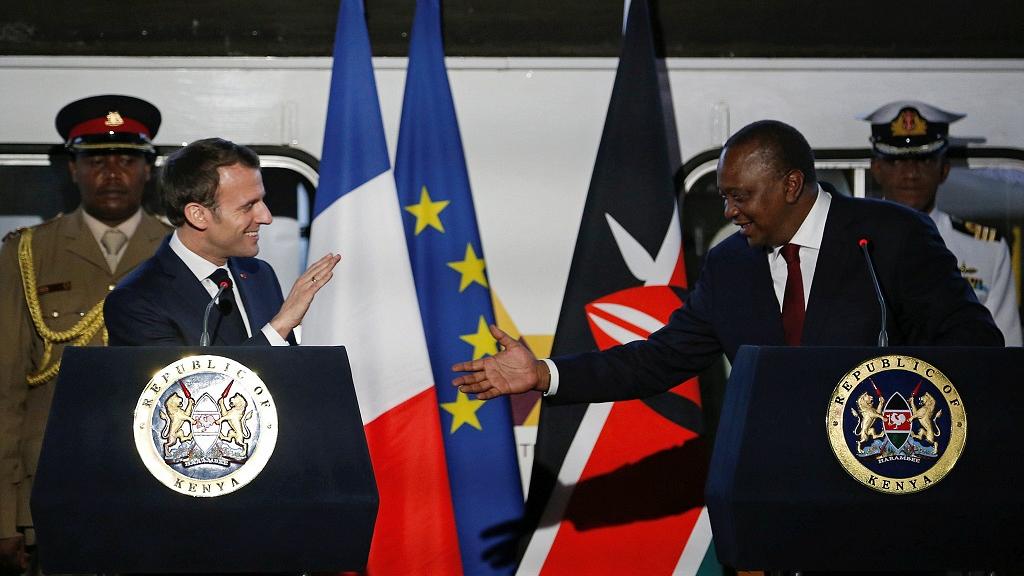 French president Emmanuel Macron challenged delegates attending the One Planet Summit in Kenya, to take action beyond words, as far as tackling climate change is concerned.

Macron, who is on a two-day state visit in Kenya, attended the summit he launched in 2017, with his host, president Uhuru Kenyatta.

“We need to put biodiversity at the heart of each of our actions. We make new commitments and invent a new model together. Thank you for this One Planet Summit in Africa,” Macron said on Thursday.

The summit, which brought together over 4,000 delegates to Nairobi, focuses on ensuring the preservation and sustainability of forests.

Kenya’s president on his part pledged to aim for an estimate of 10 percent forest cover, as a target for curbing climate change and addressing deforestation. 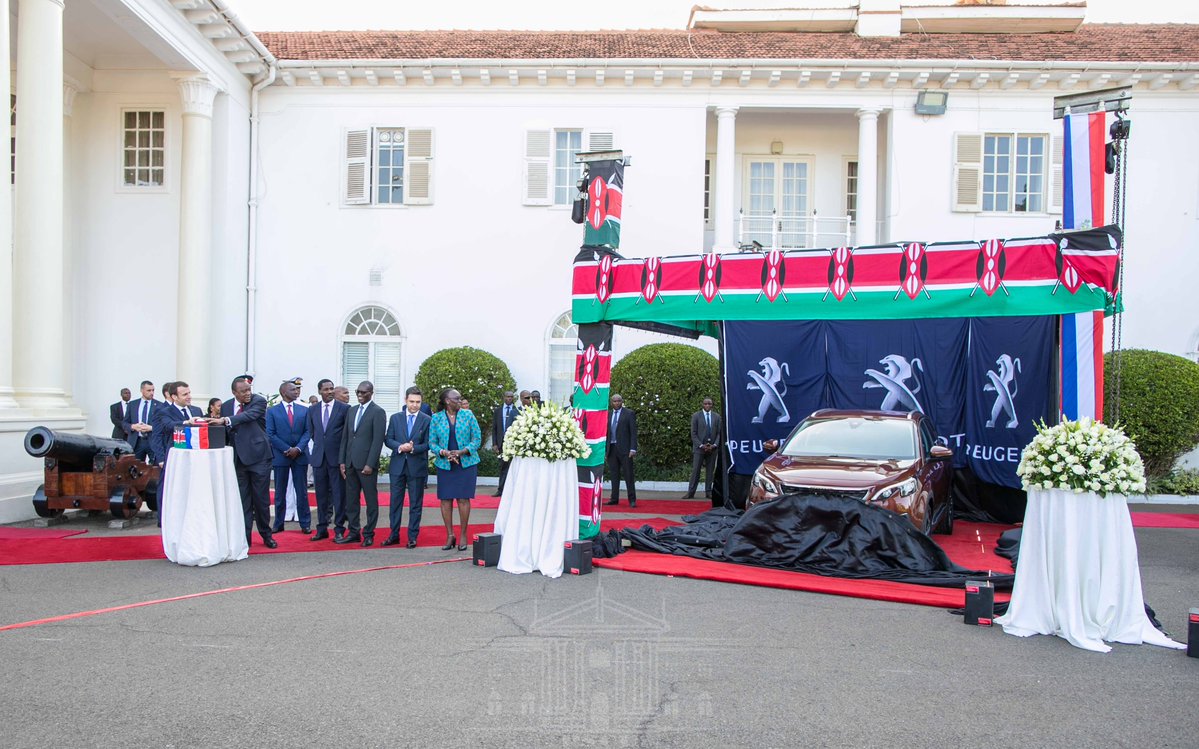 AfDB said the funds would be used to increase investment in renewable energy projects like solar power plants.

“The share of our portfolio that was in renewable energy generation between 2013 and 2015 was 59 percent but from 2015 to 2018 we moved from that to 95 percent,” AfDB president Akinwumi Adesina told Reuters on the sidelines of a U.N. environment meeting.

The World Bank said some of the beneficiaries of its funding would include projects in Ethiopia, Rwanda and Kenya.

French president Emmanuel Macron, who was travelling with a business delegation in Kenya, witnessed the signing of infrastructure contracts worth more than 2 billion euros ($2.26 billion) on Thursday.

The deals include a 1.6 billion euro 30-year concession for a Vinci-led consortium to operate a highway between Nairobi and Mau Summit.

The contracts were signed during a visit by President Emmanuel Macron, who is seeking to boost trade in the East Africa region.

Kenya is east Africa’s most advanced economy with a liberal business environment and entrepreneurial culture. French businesses however account for just a 1.4 percent market share.

French exports to Kenya in 2017 amounted to between $170 million and $225.80 million, while China, Kenya’s number one trading partner, exported goods worth $3.8 billion.

“France has supported Kenya for several years in development projects … but we are not sufficiently economically and industrially,” Macron said on Wednesday night in a news conference with Kenyatta.

Kenyatta tweets French, thanks to Macron

Kenya’s president, Uhuru Kenyatta welcomed his counterpart, Emmanuel Macron with a tweet in French, to the amusement of his millions of followers on the popular social networking site.

The historic visit, a first ever to Kenya by a French president, was fruitful as the two presidents witnessed the unveiling of a locally assembled Peugeot 3008 at State House in Nairobi.

‘‘I would like to restate that as part of the government’s policy to promote the philosophy of “Buy Kenya, Build Kenya” among our people, all government entities will be expected to buy and use locally assembled vehicles and spare parts for all official use,’ ‘Kenyatta later said, during a joint press conference.

Kenyatta, who took Macron for a drive around the grounds of State House in a Kenyan-assembled Peugeot car, said he hopes Macron’s historic visit would boost French investment in Kenya and increase the number of tourists between the two countries.

While in Kenya, Macron will attend the summit for the Climate One Planet Summit and sign contracts with Kenyan leaders totaling €3 billion. 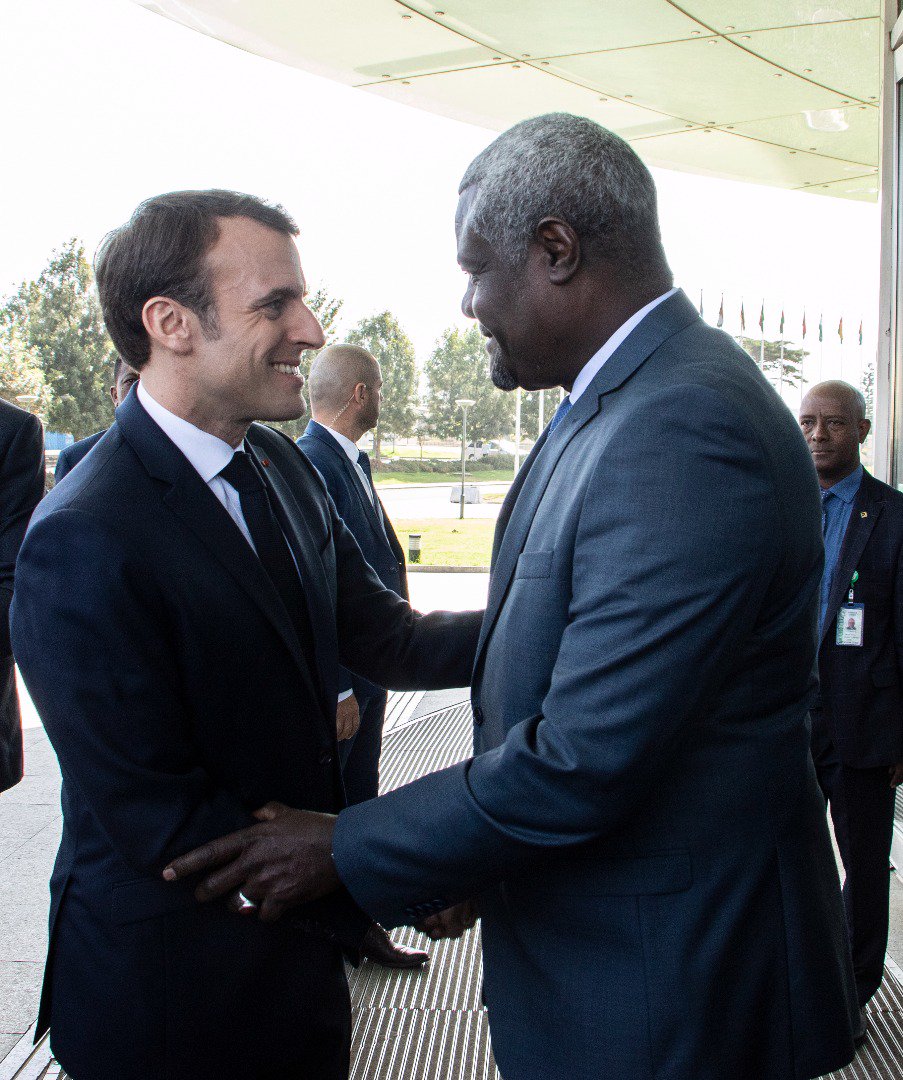 The French leader has also been invited to attend the 25th anniversary of the genocide in Rwanda, which is scheduled to happen next month on April 7.

“President Macron has… been invited to the 25th commemoration of the 1994 genocide,” Rwanda’s state minister for foreign affairs, Olivier Nduhungirehe, told AFP.

Macron has not indicated whether he will attend the event in the Rwandan capital.

If he accepts, Macron will become only the second French president to visit the country since the genocide, which still poisons relations between the two nations.
Kigali has long insisted that France supported the Hutu regime and helped train the soldiers and militiamen who carried out the killing of minority ethnic Tutsis and moderate Hutus.

Paris has consistently denied any involvement in the massacre, which the UN says claimed about 800,000 lives in 100 days between April and July 1994.

In December, French judges dropped a long-running investigation into the killing of former Rwandan president Juvenal Habyarimana in April 1994, the event that sparked the blood-letting.

The probe represented a major source of tension between the two countries after seven people close to President Paul Kagame were charged in the French investigation.

It also promotes investment in the continent and sends peacekeepers to troublespots.

Macron last year pledged a Franco-Ethiopian agreement on a new system to protect these monuments threatened by erosion.

Back in Addis Ababa, a number of deals were penned by sector ministers as Abiy and Macron looked on.

The agreements include a deal to help Ethiopia build a navy and provides for air cooperation, joint operations and opportunities for training and equipment purchases.

“This unprecedented defense cooperation agreement provides a framework… and notably opens the way for France to assist in establishing an Ethiopian naval component,” Macron told a news conference alongside Abiy.

They also agreed deals to develop Ethiopia’s cultural heritage, including preserving churches and opening an archaeological dig at a 12th century village. Paris will provide 100 million euros to help the country’s economic transition.

Macron was also expected to commiserate with Ethiopia, a country mourning the crash on Sunday of an Ethiopian Airlines Boeing, which killed 157 people, including 9 French.

Djibouti’s president Ismail Omar Guelleh called upon French companies to invest in its new international free Zone of Djibouti, as he addressed a joint press conference with Emmanuel Macron.

In 2015, Guelleh criticized France – from which it gained independence in 1977 – for abandoning Djibouti and investing very little.

Guelleh also hailed France for supporting its cause at the United Nations Security Council, where it has accused Eritrea of occupying part of its territory and holding 13 Djiboutian soldiers.

‘‘This support allowed the border dispute with Eritrea and the question of Djiboutian prisoners to be brought to the attention of the Security Council with a view to their final settlement,’‘ Guelleh said.

The French president, who is on a three nation tour of the East African region, will also meet with the Commander of the Djibouti base, the largest French base abroad.

French president Emmanuel Macron, who is currently on an East African tour of Djibouti, Ethiopia and Kenya, on Tuesday called for a ‘reasonable duration’ to the transition period in Algeria.

Macron, who started his tour in Djibouti, said president Abdelaziz Bouteflika’s decision to abandon his quest for a fifth term in power opened a new chapter in Algeria’s history.

Bouteflika late on Monday bowed to weeks of mass demonstrations against his 20-year rule but also postponed an election due in April, promising social and economic reforms in the former French colony.

Macron gave no details on what he considered a reasonable transition period. 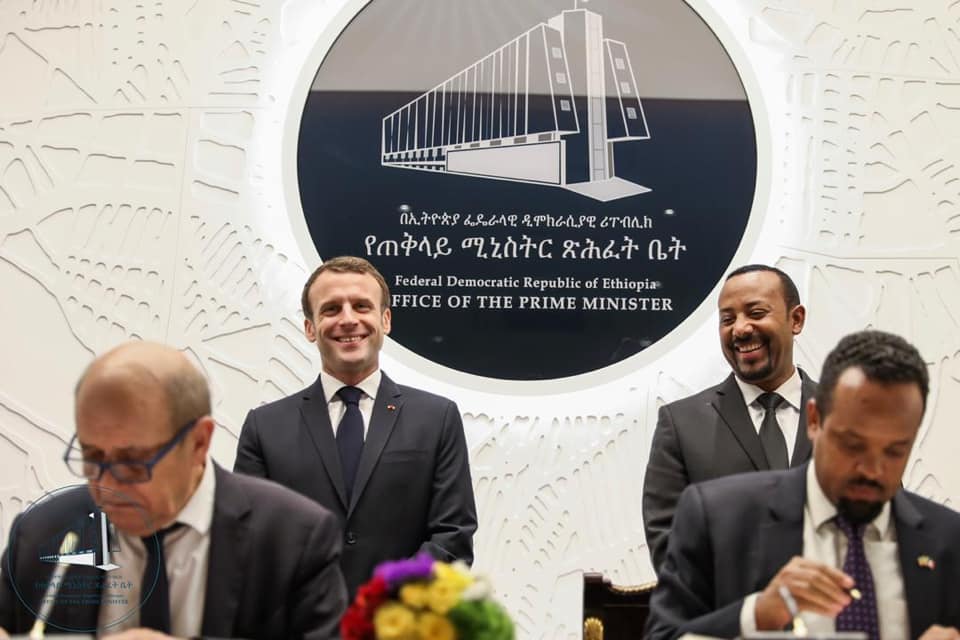 In Djibouti, Macron is on a mission to reassert the influence of the French in their former colony, amidst fears that China is expanding its economic and military influence across the continent.

Djibouti, strategically located at the southern entrance to the Red Sea on the route to the Suez Canal, hosts France’s largest naval base on the continent and is home to some 1,400 personnel used to train African troops as well as to monitor the Horn of Africa and Yemen.

Djibouti also hosts a U.S. military base used as a launch pad for operations in Yemen and Somalia, but in 2013, China opened its largest overseas military base in the country rivaling Paris and Washington directly.

“France considered Djibouti for too long to be a territory that was won,” said a senior French diplomat based in the region.

“But now the competition from China is fierce.”