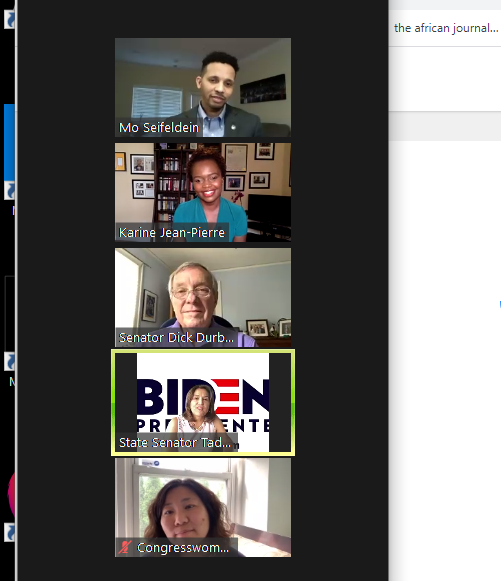 Immigrant heritage month was celebrated on June 28, 2020 through webinar as many elected officials from across America joined their voices to other voices to tell their stories and Democratic nominee Joe Biden delivered a message of hope.

“Immigration is part of the DNA of this country… It is essential to who we are as a nation,” said  Biden for President Senior Advisor Karine Jean-Pierre.

In a speech that was read, Joseph Robinette Biden Jr. the presumptive Democratic nominee said his grand grandparents came from Irish Island, his grandfather delivered furniture in New Jersey, and his father went on to fight World War II before he became a bank manager.

“My dad raised me and my four sisters to love the country that gives all families opportunities,” he said.  He added that “unless your ancestors are Native – Americans or brought here by force, your family tree probably your grand mom or pa came from somewhere else like the million of immigrants who are coming to our shore, and our borders yearning to breathe free.” He saluted the multiple efforts made by immigrants during  covid – 19. “During this pandemic we have seen immigrants leading our front – line effort as doctors, nurses, delivery drivers, small business owners and so many others,” he said. “This immigrant heritage month, we celebrate all immigrants who come to our nation, and made our cities strong, and we remember that what makes us Americans is so much more than where we were born.”

And then,  Illinois Senator Dick Durbin explained how his mother as immigrant met his father and get married. He said he has his mother naturalization certificate in his office,  and which remembers him where he comes from. He dislikes the Trump administration’s policy on travel ban, and deferred action for childhood Arrivals  (DACA). “These things must be change,” he said.

New York Congresswoman Grace Meng whose parents are immigrants said, “this president has demonized immigrants.” She remembers when her daughter has asked her if they are going to be deported as they do not look like others. “I am proud to be immigrant,” she said.

Florida State Senator Annette Taddeo said her dad come from Italy. In Florida, she represents half – millions of people and more of them are immigrants. She has mentioned how she has seen kids who are worrying if their parents are going to come home. She remembers the date she gave a commencement speech after she was elected as senator and as immigrant. “This made me feel good about what we are and where we are going,” she said.

Alexandria, Virginia Councilman Mohamed Seifeldein was born in Sudan in Africa. As an immigrant Mr. Mohamed said he has realized that hardworking is beneficial. He has refused to be pessimistic. “ I am confident we will prevail,” he said. He has urged people to register and exercise their right to vote.

Karine Jean-Pierre whose parents come from Haiti and was born in Martinique in France said we took a wrong turn as she was talking about  immigration policy under president Trump administration. “As President, Biden will bring us together as a nation,  outpass  the systematic racism that denies so many immigrants and people of color their opportunity to pursue the American dream,” she said.