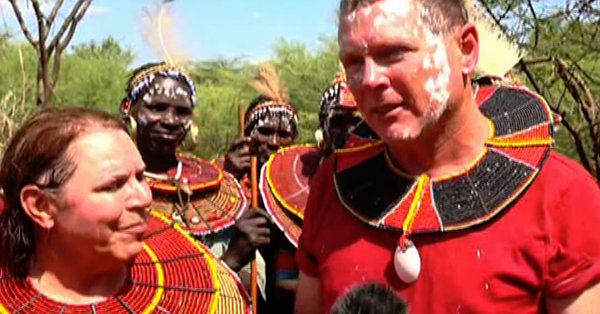 The desire to be a part of the Pokot culture in Kenya has brought a lot of anger towards American missionary Trizah Estes and her husband Tony Estes who decided to go through all the traditional Pokot wedding rites including the banned female genital mutilation (FGM).

The traditionally wedded couple who has lived in Paka Hills in Tiati, Baringo County, for 10 years is being criticized for contravening Kenya’s Act (2011) which criminalizes the execution, procurement, and providing a space for FGM.

Trizah Estes was alleged to have undergone the FGM in a video report filed by local TV channel K24 and reported by several online news sites even though other TV channels that covered the ceremony did not state that piece of information.

Her husband, Tony Estes, paid dowry of camel and presented food, drinks and money as part of Pokot culture before they took their vows after a long walk from the bride’s adopted house to the groom’s house where they drank Mursik (a traditional fermented cow or goat milk), ate camel meat amidst music and dance by dozens of locals who joined them.

“It has been a blessing for me to be able to do this and be accepted by these people. I have been able to pay a dowry of a camel, food, drinks and also money,” said Tony.

The couple, who introduced Christianity and medical services to the town, were given Pokot names as a form of welcome into the tribe. “This Pokot tribe, according to Kenyans is considered as a fierce tribe but I do not find them that way at all. These are just people trying to survive, I minister to them and show them the way of God,” said Trizah.

I’m the first known person to come and help them. You know when I first came here in 2009 there was no road but, now there is one, it used to take me about 2 days to get up here,” she added in the interview with K24.