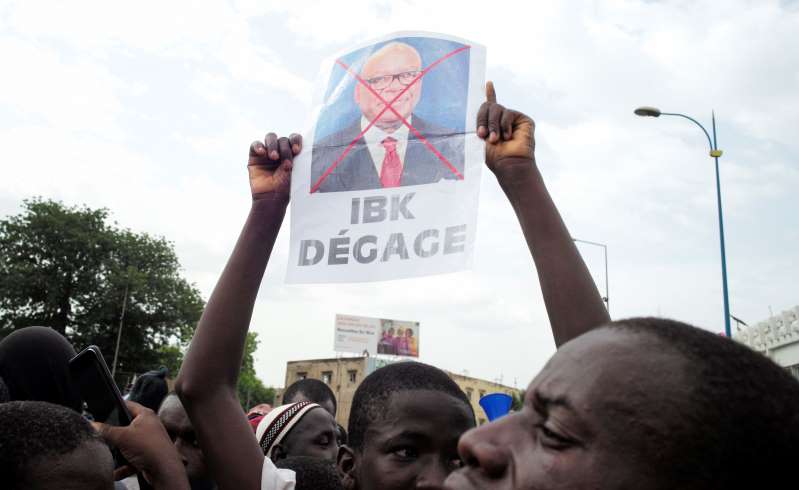 Mali’s President Ibrahim Boubacar Keita announced on Tuesday that he would hold talks on establishing a new unity government, after weeks of escalating criticism from the country’s political opposition.

In a speech in the capital Bamako, the president also suggested first steps towards reforming the constitutional court and the national parliament.

The series of announcements came as Keita has been struggling to maintain political support in the volatile West African state over a jihadist revolt that first broke out in the north in 2012.

The violence has since spread to the center of the country, inflaming ethnic tensions, as well as to neighboring Burkina Faso and Niger.

Thousands of soldiers and civilians have died in the conflict, while hundreds of thousands more have had to flee their homes.

But Mali’s economic stagnation, faltering public services, and a widespread perception of corrupt governance has also fed opposition to Keita.

On June 5, tens of thousands of people rallied in the Bamako demanding the president’s resignation over his perceived mismanagement of the poor Sahel country.

That protest was organized by a coalition of political opposition groups, which has since rebranded itself the “June 5” movement.

The rally also followed sporadic demonstrations last month over the outcome of recent parliamentary elections, which Keita’s party won, as well as over coronavirus restrictions.

On Tuesday, Keita said he would “begin consultations for the formation of a government of national unity,” in an apparent overture to Mali’s political opposition.

Details about proposed reforms to the constitutional court and national parliament are sketchy.

However, the constitutional court caused controversy in Mali in April when it overturned several results for parliamentary seats in the recent elections.

Despite the presence of thousands of foreign troops in Mali, violence has continued apace, raising questions about the government’s handling of the crisis.

In the latest attack, on Sunday, militants killed 24 soldiers in an ambush in central Mali.

Long-delayed parliamentary elections, which were held in March, appear to have exacerbated underlying political tensions in the former French colony.

The poll had been postponed several times since 2018, mostly because of security concerns.

But the government decided to go ahead with the vote this year, despite rampant insecurity and the coronavirus.
Holding elections was viewed as critical to breaking Mali’s cycle of violence.

The hope is that new MPs will endorse changes to the constitution that will promote decentralization — which experts argue could decrease conflict.

March’s election was marred by jihadist attacks as well as the kidnapping of opposition leader Soumaila Cisse, however. Opposition parties also contested the results.

In a move that triggered protests in several cities, Mali’s constitutional court in April overturned the results in some 30 seats, which saw about a dozen candidates from the presidential party take parliamentary seats.

Keita’s decision to form a new government of national unity also comes after speculation in Bamako political circles about whether the president would dissolve the parliament. He did not explicitly rule out this option on Tuesday.

The president’s promise to hold talks on a new unity government suggests the inclusion opposition figures, but it is not yet clear who exactly would be invited to join.