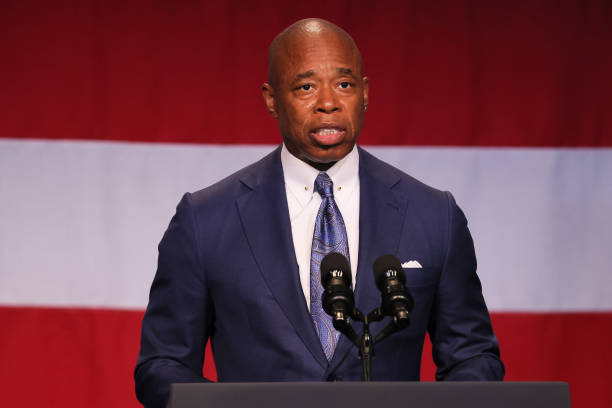 “New Yorkers deserve a seat at the table to share their vision for our city’s future. It is why I engage and speak with community groups in all five boroughs every day, making sure I hear their concerns and dreams,” said Mayor Adams. “Having that input from New Yorkers is helping us ‘Get Stuff Done’ the right way. But I am only just one person and that’s why I am grateful to NYC Speaks for conducting the largest public policy survey in our city’s history, asking over 62,000 New Yorkers what their priorities are. Those responses led to our administration creating an action plan that covers five key issues crucial to New Yorkers’ success and well-being. When working together, our community can address the issues that affect their lives the most.”

“Today’s announcement is the result of this administration’s continued commitment to put people first,” said Deputy Mayor for Strategic Initiatives Sheena Wright. “The NYC Speaks Action Plan comes directly from the voices of New Yorkers — hundreds of community conversations, the largest policy survey in our city’s history, and working directly with leaders in the Adams administration. Together, as one united city, we are prepared to accomplish the bold, shared vision laid out in the Action Plan’s North Stars.”

“NYC Speaks is only scratching the surface of what a people-driven transformation of city government can look like,” said NYC Speaks Co-Executive Director Jose Serrano-McClain, partner, HR&A Advisors. “NYC Speaks is proving that when civic engagement is done with rigor it can bring together City Hall, our leading institutions, and communities across the city to align on the kind of bold actions that address the big challenges we are facing as a city. We look forward to the administration seeing through the commitments laid in the NYC Speaks Action Plan, to keeping New Yorkers engaged, and to city government continuing to innovate in centering the voice of the people in major plans.”

“NYC Speaks has successfully incorporated thousands of unique New Yorkers’ voices to guide thoughtful plans to improve our city,” said NYC Speaks Co-Executive Director Dr. Shango Blake. “The effort — made possible by hundreds of devoted community advocates, canvassers, institutions, policymakers, and many more — has been fruitful, revealing, and inspiring. We’re thrilled to continue our partnership with the city and launch NYC Speaks 2.0 next year, where we hope even more New Yorkers will participate in this inclusive and innovative partnership between government and constituents.”

Following the results of the quantitative data, NYC Speaks launched community conversations to bring the survey data back to communities to interpret and help develop tangible actions. A total of 50 community-based organizations received microgrants to bring conversations to their communities, and 30 young people also joined the initiative as youth ambassadors and led conversations in their community. In total, NYC Speaks facilitated 220+ community conversations that convened in eight languages with 4,800 residents. The events were hosted online and in-person in all five boroughs, and served populations that have been historically marginalized, such as Black and Brown residents, seniors, those impacted by the criminal justice system, people living with disabilities, women, and the LGBTQIA+ community.

The Action Plan contains five key “North Stars” — foundational policy goals for New York City along with initial commitments from city government. The North Stars reflect the collective vision of New Yorkers and of the Adams administration to create a fairer, more equitable city for all.

Within the Adams administration, work is already underway to advance the objectives of the North Stars. Ranging from investing in initiatives that create pathways to the green economy to transforming New York City into a ‘City of Yes‘ that will build affordable housing for communities most in need, the North Stars align with Mayor Adams’s current policy agenda.

“The New York Speaks Action Plan is truly the embodiment of ‘of the people, for the people, and by the people,’” said Deputy Mayor for Operations Meera Joshi. “New Yorkers have distinct opinions, views, wants, and, yes, demands from their municipal government and Mayor Adams, Deputy Mayor Wright, and the entire administration have been listening and are committed to acting on these priorities.”

“NYC Speaks represents an innovative approach to broad-based community engagement, and I appreciate the tens of thousands of New Yorkers who have shared their feedback for the future of the city,” said Deputy Mayor for Economic and Workforce Development Maria Torres-Springer. “This engagement has reconfirmed that the central challenges facing New York are well understood by its residents, including the availability of housing and opportunities for economic advancement. I look forward to working with my colleagues in government to be responsive to this clear feedback.”

“Thousands of New Yorkers from all across the city shared their voices through NYC Speaks and we listened,” said Deputy Mayor for Health and Human Services Anne Williams-Isom. “With this action plan, we are answering that call. Ultimately, we strive to deliver services and implement policies for our fellow New Yorkers guided by their voice. Thank you to the teams across the government that have been part of this initiative and everyone who made their voice heard by completing our surveys. Together, we can create a better New York.”

“People often know exactly what they want and need in order for their community to prosper,” said Deputy Mayor for Public Safety Philip Banks III. “Our job in government is to listen to those ideas, learn, and build that feedback into our plans for the future. This initiative does just that.”

“The NYC Speaks survey was an incredible effort to bring the needs of New Yorkers to the heart of this administration,” said Chief Housing Officer Jessica Katz. “From the concerns around housing needs and how cross cutting issues are for New Yorkers, the NYC Speaks Action Plan reflects the day-to-day reality of our neighbors and gives a clear path forward to build a stronger, more equitable, and fairer city for all.”

“The cornerstone of any great public school is an engaged community that feels a responsibility to the young people of that school,” said DOE Chancellor David C. Banks. “It is an honor to be a part of the long-term strides that this administration is taking to improve the lives of all New Yorkers, and we are proud of the opportunity this plan creates for our youngest citizens. We are listening, we are learning, and we are excited to facilitate positive change.”

“When I spoke upon my experience of being the only black female in educational spaces, NYC Speaks listened,” said, Omosefe Noruwa, youth ambassador, NYC Speaks. “This initiative provided me with a platform to share my ideas on racial inequality in education and helped me develop my youth mentorship program, PME Success Network. I feel lucky to have had the opportunity to be a part of this initiative and I hope that it results in more young people of color feeling as though they can do it too.”

“Immigrant communities tend to lack information on city government and resources,” said Erum Hanif, chief executive officer, APNA Brooklyn Community Center. “Many members of immigrant communities are limited English Proficient, are not technologically savvy and don’t know where or how to find the information and resources about city programs and services. APNA Brooklyn Community Center was able to join efforts with NYC Speaks and host multiple conversations with several non-English speakers in Urdu. It provided them an opportunity to learn about city services and get civically more engaged. The conversations were highly important for the participants, their families, and the immigrant community at large, and I continue to receive requests to host more.”

“NYC Speaks was an innovative project that actively sought to listen to everyday New Yorkers in their own neighborhoods,” said Juan Rosa, national director of civic engagement, NALEO Educational Fund. “At NALEO Educational Fund, we are dedicated to ensuring that Latino voices are heard in all civic processes, and NYC Speaks gave us a great opportunity to elevate the voices of Latino community members regarding the future of the city of New York. As a non-profit organization, it was encouraging to see how the city partnered with CBOs on equal footing to implement the various phases of NYC Speaks.”

“An initiative such as NYC Speaks that opens the dialogue to overlooked and underrepresented people is a superpower,” said Terra Renee, founder and CEO, African Women in Cinema. “We are always looking for helpful ways to reach out to the community. We had a great turn out to the conversations that we hosted. Our community voices will be heard as it relates to some of the policies in the city we live in. People were so appreciative that policy makers took the time out to hear their concerns. I hope to see this become a staple.”

“There’s so much value in what NYC Speaks was able to accomplish,” said Patricia Hernandez, director of metro regions, Corporation for Supportive Housing. “NYC Speaks allowed for a structured space and enough time to really go through an agenda. We were able to focus on particular topics and create action plans while bringing together different sectors to get the whole picture. This initiative was a great model of getting key stakeholders in one room to accomplish a task. We created short term, medium term, and long-term goals.”