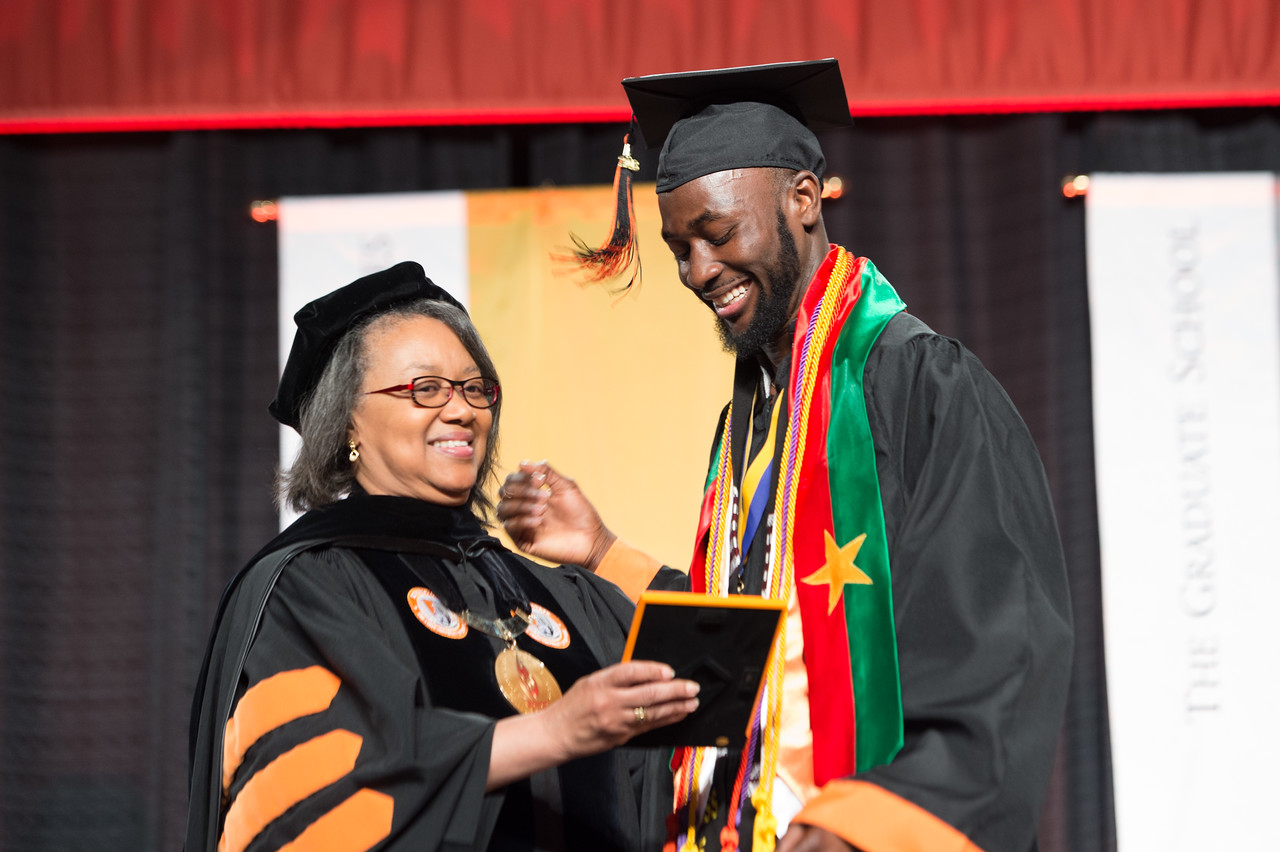 A Burkina Faso ( West Africa ) young man has made history as he  received an award for the highest Cumulative GPA for the Educational Opportunity program ( EOP) as a senior at The State University of New York University (SUNY) / Buffalo.

Mohamed Koanda 23, majored in computer information system, with mathematics as minor, graduated with a GPA of 3.92 at SUNY Buffalo State College, has made his native country, Burkina Faso proud of him.

“Congratulations to Mohamed Koanda, our fellow citizens who is a computer system engineer, and who graduated  as honor student at State University of New York (SUNY) / Buffalo. I am immensely proud of him,” Rock Marc Christian Kabore, president of Burkina Faso said in a tweet.

Mohamed who was born in Burkina Faso in West Africa, arrives in New York in 2011. He was 16 years – old – man and was speaking only French the official language of Burkina Faso, and Moore, his dialect.

“I did not speak English and my two years and half in High School and four years in College were very hard in my life,” Mohamed said.

His first school in New York was Bronx  High School of Business where he met a dedicated teacher, Ms. Marella Richardson, who was very helpful for his success. Mohamed has described her “ as a mother, a mentor, and she  has been supporting me since high school.”

“I have seen him grown over the seven years I know him  into a very intelligent , trustworthy, and a role model to his peers.  I could not have been more proud of his accomplishments, in such a short time,” Ms. Richardson said. “ You could see the hunger for success in his eyes.”

That hunger for success was real. To do his homework, Mohamed  had to translate it first in French. He also took English classes during summer to hone his English. In addition to that his father Ali Koanda was helpful. “I had to read loudly my homework to my father who tried to help me as he could,” he said.

Mohamed also attended  two programs – Armory College Prep, and College Success – which allowed him to learn more English, and to be prepared for college.

Graduated from Bronx  High School of Business, he chose State University of New York (SUNY) / Buffalo. He  decided to go there because “ It is far from New York and there are very good teachers there,” he said.

Mohamed is very lucky. Once again, he will meet another dedicated professor, Carole Miller Canestrari who will be his adviser during his four years college. “She was number one to go  whenever I encounter any issue in school. She guided me every day in college, she showed me  what kind of classes to take while I was in college. She always made sure I was on course with my education. In addition, she also helped me and nominated me for the SUNY Chancellor’s Award for Student Excellence,” he said.

“Mohamed is a remarkable young man who has overcome incredible obstacles to get to this point in his life. I am confident that Mohamed will continue to see success in all areas of his life because of his determination, resiliency, and love for learning and life. I am excited to see what the future has in store for this young man. Mohamed entered Buffalo State as my EOP ( Educational Opportunity Program)  student and is leaving as my Burkinabé son.  I have been honored to be part of this amazing young man’s journey,” Ms. Canestrari said.

As Mohamed gazes at the horizon for the future, a look back to his achievement gives hope. According to Ms. Canestrari, “The State University of New York /College system is made up of more than 600,000 students. Mohamed  was one of only 249 students chosen to be awarded the SUNY Chancellor’s Award for Student Excellence. At the New York State University College at Buffalo (Buffalo State), there were four recipients of this award and Mohamed had the highest GPA among the awardees.”

Mohamed’ s father Ali Koanda said he was very happy when he heard the news about his son’s achievement. “ I was crying, he is humble, he is still young, and I want him to continue.”

When we asked Mohamed about the secret of success, he said: My goal was to work very hard to success in an academic way, I used to stay to the library until 5: 00 am, and I have my father’s blessing.”

Mohamed is starting  in July  a three months  training  in web development in  California at Silicon Valley Campus. He has to pay a  $ 13,000 tuition  for that, and which he has not yet. He will welcome any donation.

As he is continuing his endeavor, Mohamed is grateful to all those who has supported him. “ I want to say thank you to the president of Burkina Faso for his encouragement,” said  Mohamed who denied that the president has phoned him. “I am available if the country needs me,” he said.