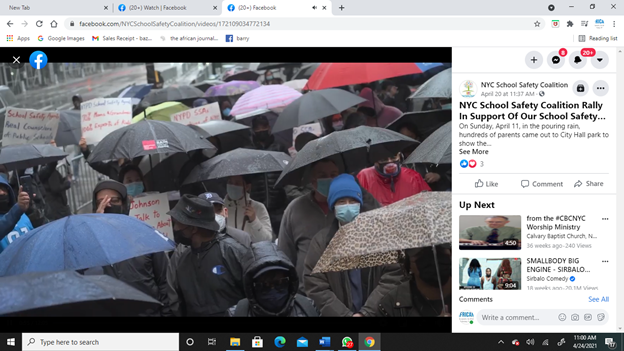 New York School Safety Coalition has organized a rally on April 11,2021 to protest against some electoral officials’ campaign  promises that will aim to eliminate completely school safety agents who will be replaced by guarding counselors.

For that reason, New York School Safety Coalition and several other organizations in New York City took to the street to protest against what Mona Davids founder and president of New York Charter Parents Association, and the New York City Parents Union, has called “outrage, absurd, and ludicrous idea.”

Mohammed Mardah chairman of the African Advisory Council made it clear: “As parent whose children graduated from public school, who has children, today I am here to let our public-school safety agents know we stand with them and we will not let anyone take the safety of our children for granted, and that what they are trying to do, we are here to protect you.”  “ We appreciate you; we love you, and we will fight for you,” he said.

“It is not fair to put these people out of job in the midst of this pandemic ( Covid – 19). We need them, they work hard to make sure our kids are safe,” said Sadio Yaya Barry, president of Association des Senegalais d’Amerique.”

Mr. Floyd said the rally began to have an impact as it lets parents know what is going on. “There is hope,” he said, “nobody is going to allow 5,000 brown  women to lose their job.”