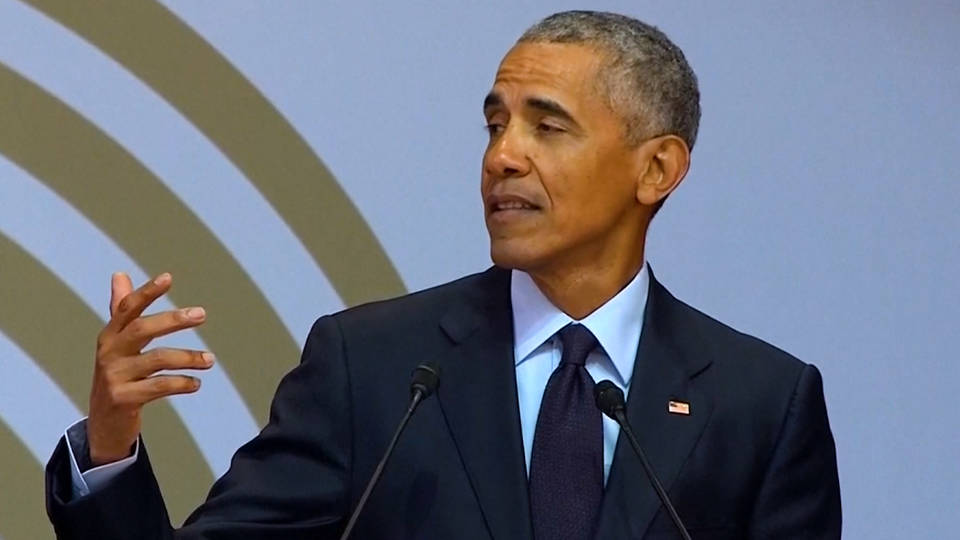 Barack Obama has delivered a stinging rebuke to his successor as US president, condemning politicians who trade in the politics of fear and deny objective reality and, when caught in a lie, double down.

In what has been described as his most important speech since leaving office, Obama used the Nelson Mandela annual lecture in front of an ecstatic 15,000-strong crowd in Johannesburg to warn that “the politics of fear, resentment, retrenchment” are on the move “at a pace unimaginable just a few years ago.”

Without once mentioning Donald Trump by name, Obama took aim at the “utter loss of shame among political leaders when they’re caught in a lie and they just double down and lie some more”. These days “people just make stuff up” in politics and no longer show embarrassment when being caught out.

In what was Obama’s first visit to Africa since leaving office in 2017, he warned that the denial of facts and the rise of the strongman could be the undoing of democracy.

He said he did not know where to start with politicians who, faced with overwhelming scientific opinion, described climate change as “an elaborate hoax”.

“Don’t you think these people so intent on putting people down and pumping themselves up are small hearted – that there is something they are just afraid of?,” he asked.

Marking the 100th anniversary of Mandela’s birth, Obama hailed the apparent inexorable progress that had been achieved since the South African anti-apartheid leader’s release from jail and the fall of the Berlin wall, but then warned that progress seemed to be in reverse as a new era of strongmen, and disenchantment with the necessity of democracy, gained hold.

The world seemed to be returning to “an older, more dangerous and more brutal way of doing business,” he said. Too many sought to “undermine institutions on which democracy is grounded”.

Insisting he was not being alarmist, just stating the facts, Obama said “strongmen politics are in the ascendant”.

History, he said, shows how easily people can be convinced to turn on those who look different or worship in a different way.

America’s first black president warned that countries that relied on nationalism and xenophobia as their main organizing principle eventually found themselves consumed by civil war or external war. “Check the history books.”

And he had harsh words for those in the new global elite who are increasingly detached from a locality or any nation state, claiming they were missing the signals of resentment being stored up by globalization, insecurity and growing inequality.

“The previous structure of powers of injustice and exploitation never went away, they were never fully dislodged,” he said. “For all the shining skyscrapers, entire neighborhoods, cities, regions and nations have been by-passed. For far too many people the more things have changed, the more things stayed the same”.

“An explosion in inequality” remained unaddressed, he said. “A few dozen individuals control the same amount of wealth as the poorest half of humanity. That’s not an exaggeration. It’s a statistic.”

Part of this global elite – rightwing billionaires – were now “cynically funding populist movements that fed on fears that economic insecurity was slipping away, their social status was eroding, their cultural identity was being threatened by outsiders by someone that did not speak like them”.

Although he had criticism of Chinese trading practices, and said order in migration was required, he forecast the greatest threat to job security, one of Trump’s central themes, came not from unfair trade, but from technology including artificial intelligence.

Warning the world was at a crossroads, he insisted liberal democracy and co-operation had a better story to tell, but said that this could only work if the rich paid more in tax, stopped avoiding paying tax or and stopped blinding themselves to the consequences of decisions taken in boardrooms. “The struggle for basic justice is never truly finished,” he said.

He admitted he was surprised that after a period of progress “the recent drift to reactionary politics meant the principle that we are bound together by a common humanity had to be reaffirmed”. He repeatedly attacked the politics of division and invoked the multiculturalism of the World Cup-winning French football team. “Not all of those folks look like Gauls to me. But they’re French!”

John Stremlau, a professor of international relations at the University of the Witwatersrand in Johannesburg, said: “Just by standing on the stage honouring Nelson Mandela, Obama is delivering an eloquent rebuke to Trump.”

He called the timing auspicious with the commitments that defined Mandela’s life “under assault” in the US and elsewhere. “Yesterday we had Trump and Putin standing together, now we are seeing the opposing team: Obama and Mandela,” said Stremlau.

Obama has shied away from public comment on Trump, whose administration has reversed or attacked many of Obama’s achievements. The US under Trump has withdrawn from the 2015 Paris climate agreement and the Iran nuclear deal, and tried to undercut the Affordable Care Act, known as Obamacare.

Instead of commenting on politics, Obama’s speech drew on broader themes and his admiration for Mandela, whom Obama saw as a mentor.

When Obama was a US senator, he had his picture taken with Mandela. After becoming president, he sent a copy of the photo to Mandela, who kept it in his office. Obama also made a point of visiting Mandela’s prison cell and gave a moving eulogy at Mandela’s memorial service in 2013, saying the South African leader’s life had inspired him.