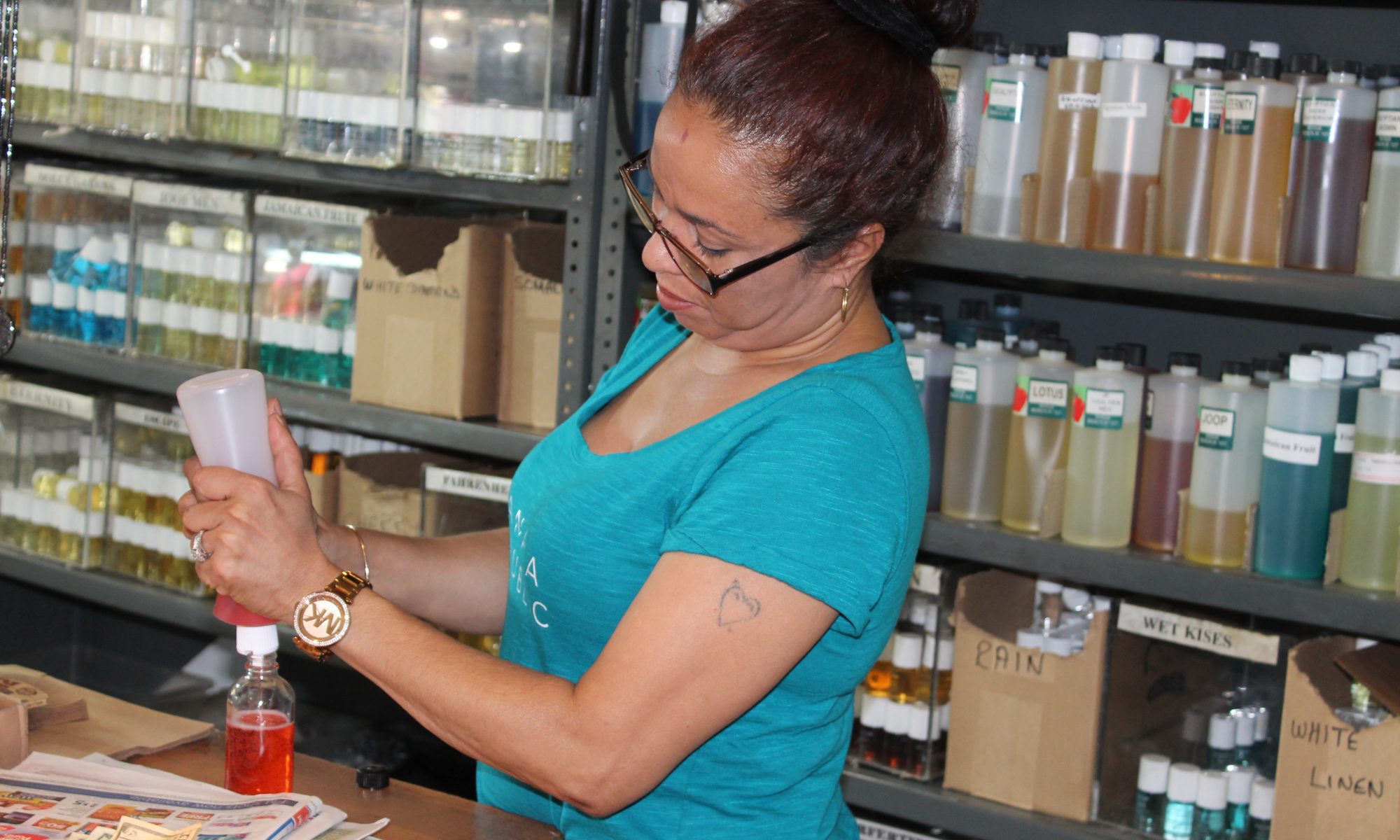 Like loincloths in Africa, oils for body in the streets of Harlem compete in term of names or label. Name it and sell it: a motto etched in mind of oil’s vendors.

Either in a store or on a street, a gaze on a row of oil bottles proves that names matter to do business. From celebrities – Obama, Paris Hilton, Michael Jordan, Kim Kardhasian, – to lewd names such as “lick me all over” or “kiss me all over,” the choice is about brand or taste. The New York Times Magazine wrote: “The hot word in the field of sales . . . is brand.” Body oils, fragrances, or perfumes oils – no confusion, it the same type of oils – are used in general for their scent. However, beyond that perfumery purpose, most people focus on the brand name.

“Black people create Obama, they don’t like smell, they like Obama,” says a multitask spokesman who works at Madina Inc., a manufacturer of natural fragrances and herbal cosmetics store in Brooklyn, as he was counting money, speaking with customers, and answering phone calls. “It is my personal feeling.”

Wearing a blue jean and a black shirt, and sitting on a plastic basket, Daouda Kone is a salesman in Harlem Fragrance Inc. According to him, names are important for the business. “They give names that attract people,” he says. “Nobody wants to name a kid Poverty.”  In front of Nicholas Variety fragrances store, at 125 th Street in Harlem, the scent of burning oil makes people feel good. Cindy Ferreira a saleswoman jot down a list of brand names customers like more in the store. “Lick me all over “comes in first place. “People love it because of the scent.” She says. As she was still talking, a man got into the store and purchased “lick me all over.”

Another customer burst with laughter. “He is going to get a great night man,” he says. No matter what brand they purchase, customers are from everywhere. Hermina Belin, 50, who is from Peekskill in New York, says she never uses perfume. She purchases “oriental noir” body oil because “it is great and last longer.” 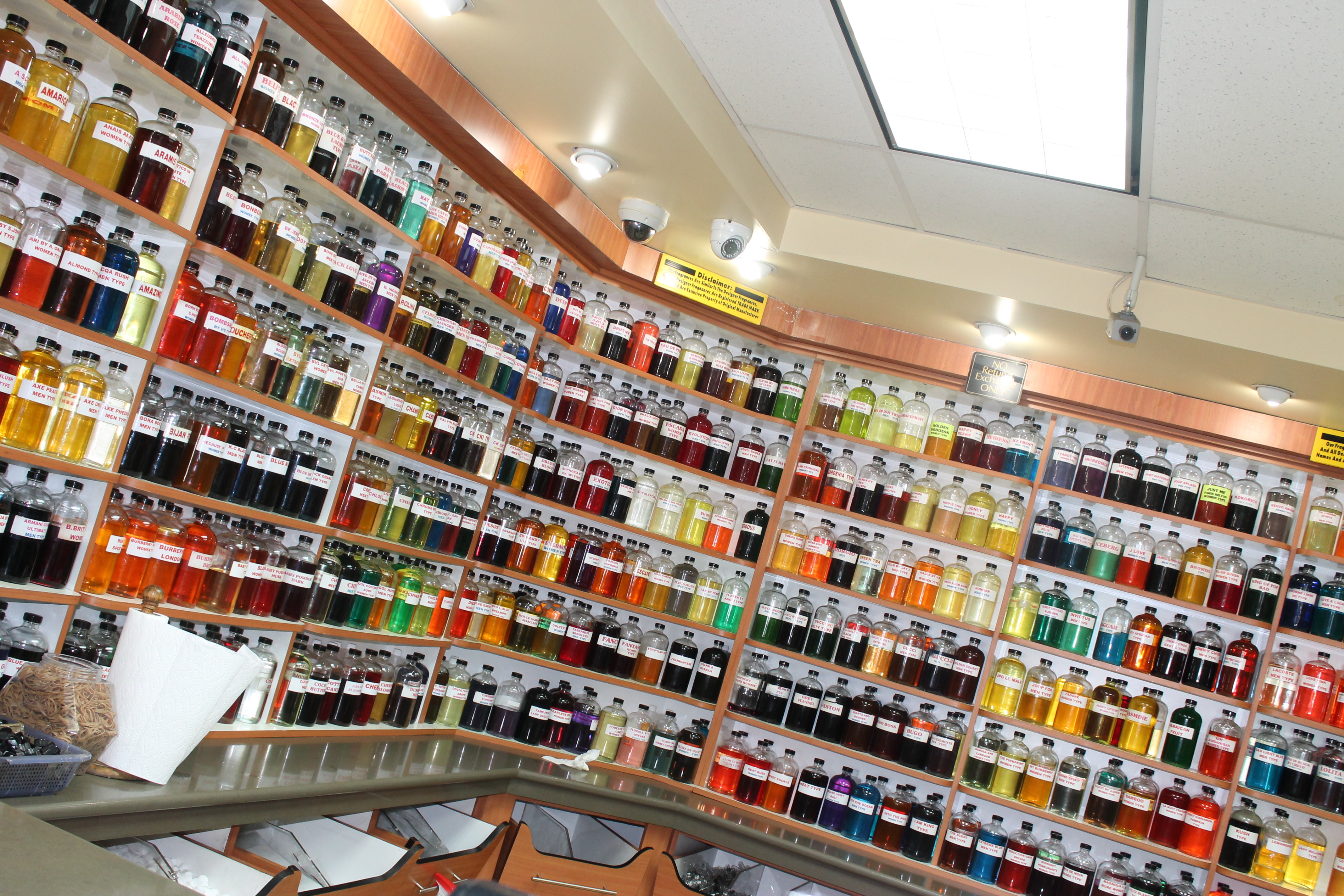 John Myrers, 34, from Connecticut purchases “Michael Kors” for himself and “African musk” for his mother. He says he is using that oil since he was young and because it “stays in my body all day. Who design brand names? “Brand names we use are not original, they are copy,” says Madina Inc’ store spokesman. There is not an established agreement or any partnership between vendors and designers. “We sell under condition of a disclaimer.” He says. “Without a disclaimer we cannot use the names.”

Brands such Kim Kardashian, Michael Jordan, among others, are those who are concerned by a disclaimer use. This is an excerpt of a disclaimer: “Name trademarks and copyrights are properties of their respective manufacturers and/ or designers. We do not represent our products to be original nor do we represent them to be exact copies. Any references to brand names are made strictly for comparison.”

A minimum price of an original Kim Kardhasian’s perfume is about $17.00 while a minimum cost of oil labeled “Kim Khardhasian” is $4.00. The copy is indeed cheap but will last longer. “The smell is not the same but almost.” Says Madina Inc.’ store spokesman. Some other brand names such as “Africa musk” or “Egyptian musk” are imported from Africa.

Who is responsible for lewd brand names? Nautica for example is an umbrella brand. Brand names such as “sexual,” skull and roses” and “F” word has been displayed in its web site. At our inquiry, a spokeswoman who promised to call back did not return the call. Back to a century, The United States of America supplied itself in some body oils from countries such China, India, Sicily, Tunis, and Alger. Bangladesh is today one of the big suppliers.

Oils arrive on big containers and the conditioning into bottles and the packaging belong to the creativity of vendors. “We write down names ourselves,” says Madina Inc. store spokesman. Body oils are obtained from the plants, leaves, fruits or seeds, and some are known for the medicinal virtue.

Although body oils users make choice based on brand names, “some people use them for spiritual purpose,” says Timolin Bracey who works in a botanical store in Queens. “They have an impact in their spiritual life, and it’s very secret.”