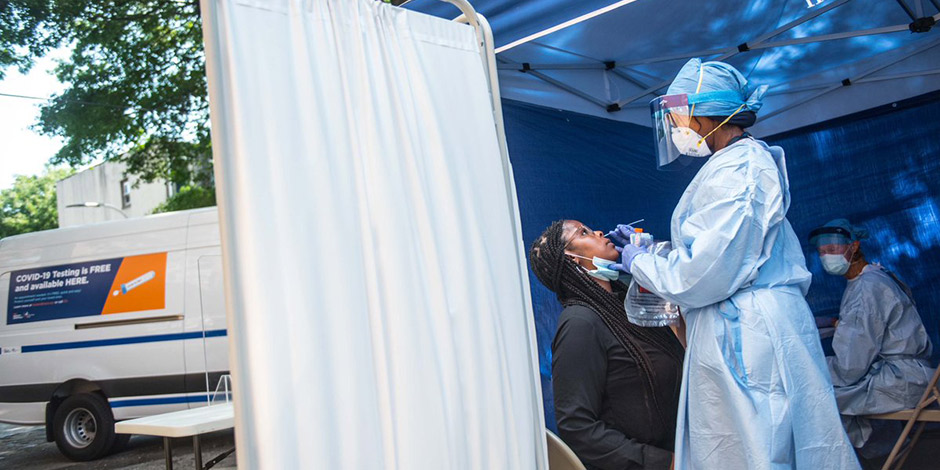 In response to the unprecedented surge of omicron cases and citywide testing demand, the NYC Test & Trace Corps announced today that, since the surge began in early December, it has doubled the number of City-run test sites available, opening over 100 new fixed and mobile COVID-19 testing sites and currently operating over 200 testing sites throughout New York City.

“The NYC Test & Trace Corps’ ability to so quickly expand the number of COVID-19 testing sites by triple digits underscores its ability to respond to the changing waves of this pandemic and threats its variants pose to New Yorkers,” said NYC Health + Hospitals President and CEO Mitchell Katz, MD. “Our City’s public health system and our partners remain committed to ensuring every New Yorker has timely and convenient resources to better protect themselves and those around them from infection. This has been our basic mission for over 20 months and will remain so for the duration of this pandemic.”

“Working with communities across NYC, we have doubled the number of City-run testing sites and distributed millions of at-home test kits to help New Yorkers get tested to fight back against the omicron surge,” said Senior Vice President of Ambulatory Care and Population Health at New York City Health + Hospitals and NYC Test & Trace Corps Executive Director Dr. Ted Long. “NYC Test & Trace and NYC Health + Hospitals stand committed to providing all New Yorkers with fast, accessible, and free testing resources. Our teams have worked around the clock to open over one hundred new testing sites across New York City to help New Yorkers quickly and conveniently get tested.”

Over 20 additional testing sites will be opening over the course of the next week.

“Since the pandemic began, day in, day out, our teams have worked tirelessly to provide additional testing resources wherever they’re needed, innovate ways to deliver testing as effectively as possible and engage community partners to determine site locations convenient to all New York’s diverse communities,” said Shifra Goldenberg, NYC Test & Trace Corps Senior Manager of Site and Service Implementation and Director of Implementation for the Office of Ambulatory Care and Population Health at NYC Health + Hospitals. “I am proud of our team members, including our healthcare workers and service operators providing testing on the frontlines of the pandemic, who have made this critical testing expansion possible and encouraged to see so many New Yorkers showing up to get tested and stop the spread.”

Since December 28, NYC Test & Trace has distributed nearly 2 million tests to schools across New York City to support the City’s “Stay Safe and Stay Open” plan. Since schools reopened on January 3, NYC Test & Trace has doubled the amount of in-school surveillance testing conducted on a daily basis. Test & Trace is also currently operating five fixed testing sites exclusively for Department of Education staff to make testing for educators and other school employees as easy as possible as they return to the classroom.

Please visit NYC.gov/covidtest for a complete, up to date list of City-run testing sites to find a location that is most convenient and accessible for you.