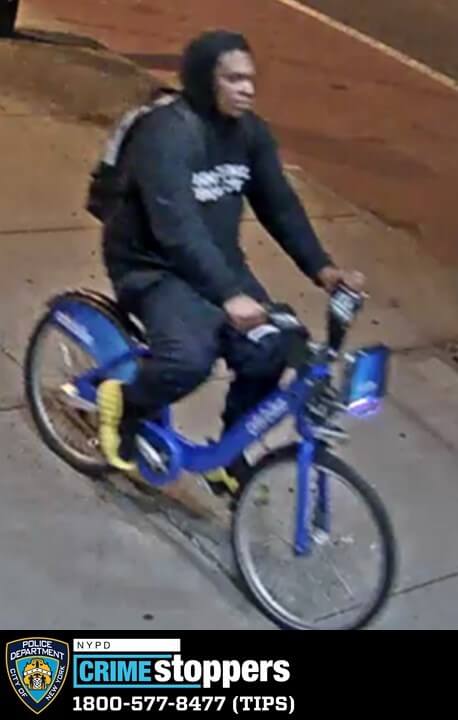 Detectives have linked the suspect behind a cold-blooded, deadly stabbing at a West Village park earlier this month to two other recent knife attacks on sleeping men around Manhattan.

“These are senseless acts on defenseless people experiencing homelessness and somebody knows this person,” Police Commissioner Keechant Sewell said of the pattern Tuesday. “We need to get this killer off our streets as and as safely as possible.”

Law enforcement sources said the serial stabber struck early on Monday morning, July 11, at Stanley Isaac Playground along the FDR Drive on the Upper East Side.

According to authorities, the assailant approached the 28-year-old man at about 3:30 a.m. that morning as he lay on a park bench and knifed him in the abdomen, then fled to parts unknown.

EMS rushed the victim to Metropolitan Hospital, where he was listed in stable condition.

Three days earlier, cops said, the suspect similarly stabbed a 59-year-old man lying on a bench near the corner of Madison Avenue and East 49th Street in Midtown at about 10 p.m. on July 8.

Following an investigation, police tied both incidents to the perpetrator who fatally knifed a 34-year-old man sleeping on a bench at Hudson River Park back on July 5.

At around 3:09 a.m. that morning, law enforcement sources said, the killer walked up to the sleeping man, displayed a sharp object and plunged it into his upper right abdomen.

Immediately after the attack, authorities noted, the suspect fled the scene on foot; he was later observed on security cameras riding a CitiBike through the area.

Sewell held a press conference alongside top NYPD brass Tuesday in desperate plea for help from the public in hopes of identifying the stabber before he strikes again. Police believe the weapon being used is a large kitchen knife which victims describe as feeling like a gut punch. Images of the suspect have been circulated to NYPD officers all over the city, still police are seeking aid from the public to prevent further death.