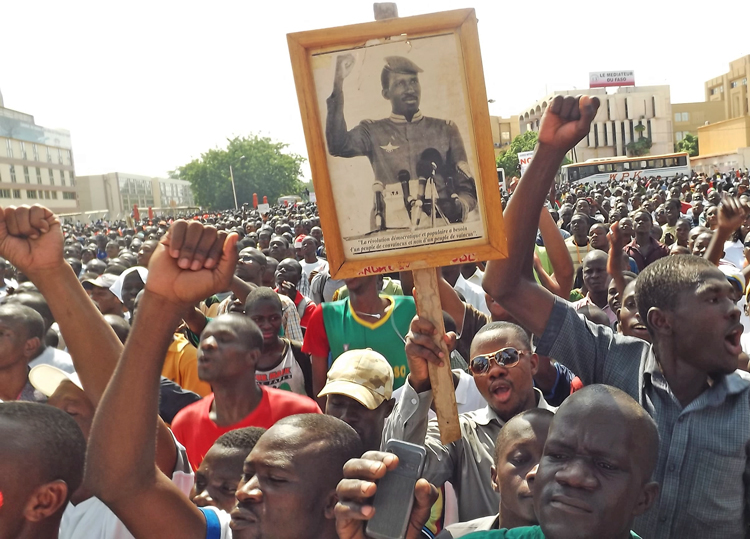 Blaise Compaore, the iron-fisted ruler of Burkina Faso for almost three decades, will stand trial along with 13 others before a military tribunal Oct. 11 for the 1987 assassination of former President Thomas Sankara.

Sankara was the central leader of the 1983-87 Burkina Faso Revolution. His murder was the beginning of a bloody counterrevolution led by Compaore, a member of the National Council of the Revolution.

In 1983 Sankara led a mass uprising that established a popular and democratic revolutionary government. The 33-year-old leader became president of Upper Volta, the West African country’s name under the former French colonial rulers. At his initiative the people adopted a new name, Burkina Faso, which means Land of Upright Men.

With a population that remains among the poorest in the world, Sankara’s political course opened the road to economic and social development. He led millions of working people in carrying out deep-going economic and social measures with the backing of the revolutionary government.

These included nationalization of the land to guarantee peasants the fruit of their labors as productive farmers; irrigation projects; and planting 10 million trees to stop the encroachment of the desert.

Steps were taken to combat the centuries-old subjugation of women. Three million children were vaccinated against common diseases. Literacy campaigns were conducted; roads, schools, housing, and a national railroad were built.

International solidarity was extended to those fighting oppression in Africa and worldwide, including standing with Cuba’s socialist revolution.

Sankara spoke out on behalf of the oppressed and exploited around the world and stood out among the leaders of struggles for national liberation in Africa after the second imperialist world war because he was a communist.

The sheer violence of the counterrevolutionary coup led by Compaore traumatized and politically disoriented a generation of peasants, workers, and young people who looked to Sankara.

Twenty-seven years later, in 2014, Compaore fled the country in face of a popular insurrection against his rule. Demands that the former dictator stand trial for Sankara’s murder were on the lips of millions as they mobilized to oust him. To this day, “Justice for Sankara!” graffiti is seen all around Ouagadougou, the capital city. Compaore now resides comfortably in exile in neighboring Ivory Coast and will be tried in absentia.

Roch Kabore, the current president of Burkina Faso, has resisted demands he ask for Compaore’s extradition. Kabore instead recently called for “national reconciliation,” and offered to consider Compaore living out his retirement in Burkina Faso. Kabore was formerly prime minister, president of the National Assembly and an adviser to Compaore.

Fidele Toe, who was minister of labor in Sankara’s government, said, “We ask that the term ‘national reconciliation’ not be used to say ‘keep quiet,’ but, on the contrary, to tell the truth about what happened.

“A country that does not know its past is lying to itself and cannot move forward,” he told the media. “It cannot say that it wants to judge the thieves if it has not shed light on its leaders.”

Soon after the assassination, Compaore claimed Sankara was accidentally slain in an exchange of gunfire with commandos who supposedly uncovered a plot by Sankara to kill him.

“It was either him or me,” Compaore said, trying to make the bloodshed look like personal rivalry.

Alouna Troare was one of six revolutionary leaders who joined Sankara in a meeting on the day of the coup. Years later he described what he witnessed. Gunfire erupted outside Sankara’s offices and soldiers demanded participants come out. “Stay! Stay!” Sankara told his comrades, according to Troare. “It’s me they want.”

Sankara left the room, his hands in the air, and was immediately shot dead, two bullets to the head, and his body sprayed with machine-gun fire. “The attackers had come to kill,” Troare said.

Five others in the meeting room were executed. Seven of Sankara’s presidential guards were murdered. The bodies of the dead were dumped in shallow graves on the outskirts of Ouagadougou. Troare managed to get away. 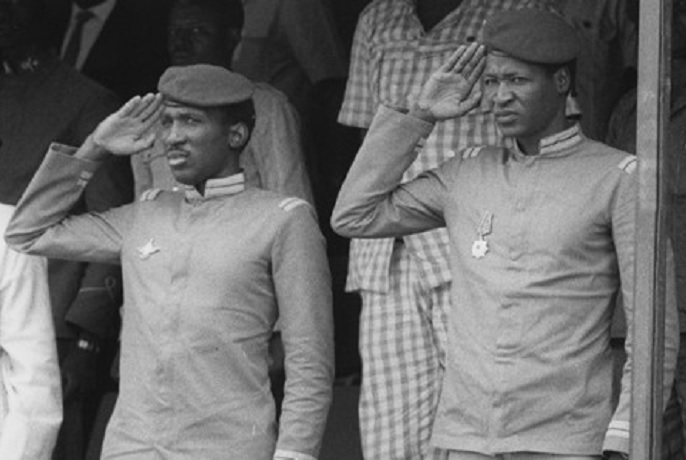 A 2015 autopsy of remains believed to be Sankara’s revealed a body that had been riddled with bullets. The findings contradicted a military doctor’s 1988 death certificate issued to Sankara’s widow. It said the revolutionary leader died of “natural causes.”

Four of Compaore’s personal guards at the time will be prosecuted for murder at the Oct. 11 trial.

The elimination of Sankara was followed by a roundup of hundreds of his supporters to smash popular resistance. These included leaders of the revolution’s mass organizations, government officials, students, professors, journalists, soldiers and others. Many were tortured and killed.

Sankara’s brother, Pascal, was detained, blindfolded, tied to a tree, beaten until his face was unrecognizable, and subjected to mock executions. Valere Some — a colleague of Sankara in the revolutionary government who tried to organize popular resistance to the coup — was for months beaten, burned, hung from the ceiling, and slashed with knives. Both survived to tell what happened to them.

In late October 1987, the commander at a military base 50 miles west of Ouagadougou attempted to rally forces against the coup. But commandos led by Compaore’s allies surrounded the base, carried out a massacre, and hunted down and executed survivors.

Mariam Sankara, the revolutionary leader’s widow, and the Sankara family, along with the family members of others murdered in the coup, have for 34 years waged a campaign to expose the truth. They have persisted despite threats, harassment and fierce opposition. They took their fight to the courts in Burkina Faso, where it was buried, and to the U.N. Human Rights Committee, which ruled in 2006 that the Compaore regime violated their rights.

During the revolution, Sankara spoke openly about the dangers that could derail the revolution and the accomplishments of working people, in face of their class enemies at home, across Africa, and in the imperialist centers.

“Our homeland has become one vast construction site where the criteria of morality, concern for social justice, and respect for everyone’s fundamental right to live and to enjoy a better and better existence are not just empty words,” Sankara said in a 1987 speech on the fourth anniversary of the revolution. These advances were made possible, he explained, by a people whose political consciousness led them to reject the “dog-eat-dog” values of the “capitalist jungle.”

But Sankara warned, “We have come up against opportunism and watched it operate. It works in various ways to get us to desert the revolutionary struggle and abandon an intransigent defense of the people’s interests in favor of a frenetic search for selfish personal gain.”

“The difficulties of the struggle,” Sankara said, “have led some comrades to desert our ranks pure and simple.”

The imperialist rulers in Washington and Paris, along with some African capitalist governments, tried in myriad ways to undermine Sankara and overthrow the revolutionary government. They feared the revolution and its example. But where they failed from the outside, Compaore’s treachery succeeded from inside to extinguish the beacon Burkina Faso became for Africa and the world, and upended the gains of the revolution.

As the trial unfolds, readers may want to discover for themselves who Thomas Sankara was and what he stood for. His speeches, the best place to start, will provide insight into the man and leader, and the Burkina Faso Revolution.

From Sankara, readers will learn history is not just about the past, but about what working people do in the present, based on past lessons, to prepare a future worthy of humanity.

“Sankara believed that a world built on different economic and social foundations can be created not by ‘technocrats,’ ‘financial wizards,’ or ‘politicians,’” Mary-Alice Waters, a leader of the Socialist Workers Party, wrote in the preface to Thomas Sankara Speaks, “but by the masses of workers and peasants whose labor, joined with the riches of nature, is the source of all wealth. By ordinary human beings who transform themselves as they become an active, conscious force, transforming their conditions of life. And the revolutionary government he headed set out along this course.”

BY PETER THIERJUNG
Courtesy of The Militant.