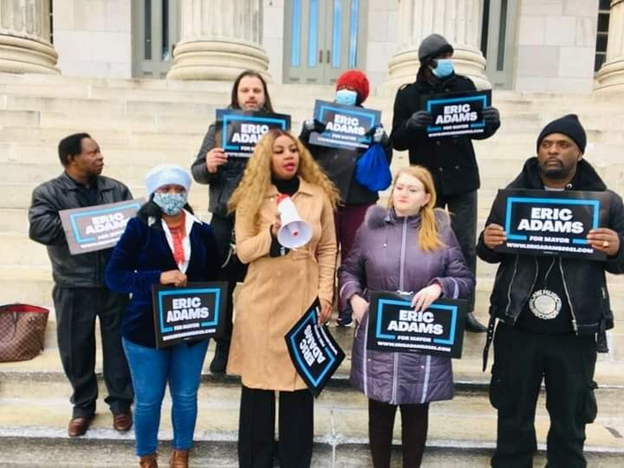 The  New York Political Coalition In partnership with  the Gorgeous Mosaic Coalition has organized on November 23, 2021  a rally in Brooklyn that aimed to take the New York City back from violent criminals, young gang members and their political enablers.

The pro-Eric Adams’s public safety rally under the leadership of Eunice Ukwuani, President of New York Political Coalition (NYPC) took place on Tuesday, November  23, 2021 from 1-2pm at the steps of Brooklyn Borough Hall by Cadman Plaza in Brooklyn. Eric Adams supporters and New Yorkers for Public Safety came out in the cold to show their support.  The Gorgeous Mosaic Coalition is for Mayor Eric Adams for the next eight years to reclaim our city for good.

“I thank my fellow New York warriors and leaders from different communities of the Gorgeous Mosaic Coalition for coming out today in a freezing cold weather to join me in support of Eric Adams,” said Eunice Ukwuani the President of New York Political Coalition (NYPC).

She said that the  Peace and Unity rally in front of Brooklyn Borough Hall  was about “ to let New Yorkers know that the same way we worked hard to elect Eric Adams is the same way we have to support him to make sure that violent groups will not disturb our Mayor-Elect administration.” And she added: “ We want the next 4 years and another 4 years to be peaceful because Eric Adams is here to do his job and to fulfill his public safety promise to keep New Yorkers safe. I want all New Yorkers to come together to support our Mayor-Elect Eric Adams in peace and unity. I believe that is the only way we can be successful. Give peace a chance because we don’t have time for distractions and will not tolerate anymore threats from any groups ever again. Say no to violence and yes to peace and unity. Violence can never lead us anywhere but to destroy.”

Ms. Ukwuani has been thankful to  Jeffrey Davis for leading the City Hall rally and Assemblyman Jose Rivera for leading the Bronx rally at Fordham Plaza in support of Eric Adams. She also said a  special thank you  to the Chinese Community, Winnie Greco & NYC Councilman, Peter Koo for coming out to join her  after she  called them the last minute.

“ I thank the Igbo Organization President, Agwu A. Agwu & members for their support during the rally,” she said. “ We did not just make our point load & clear despite the freezing cold weather but we also showed multicultural unity as a coalition.”

She was proud of their  loyalty to Eric Adams:  “Leaders like us are loyal to Eric Adams and to show him that we are worthy of joining forces with him in his plan to rebuild our City 🌆 no matter what it takes”.