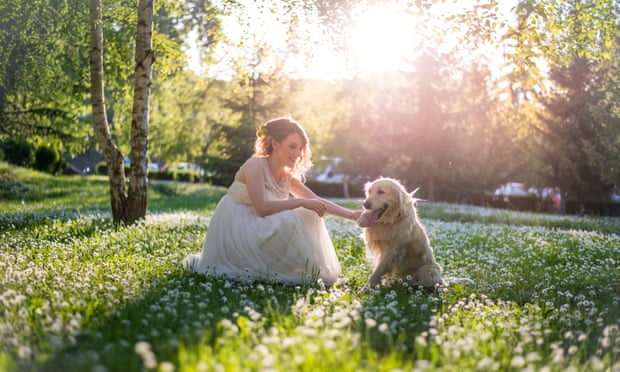 Elizabeth Hoad and her dog, Logan, tied the knot live on This Morning earlier this week – and they’re not the first to do so.

A woman married her dog. Eamonn Holmes gave the bride away. The groom, a golden retriever, wore a top hat. Love Island’s Kem Cetinay acted as a ring-bearer. It played out live and like a David Lynch fever dream on ITV’s This Morning on Tuesday. One viewer called it “deeply uncomfortable viewing”. “There has to be law against marrying your bloody dog,” tweeted another.

There is, actually – the only legal marriage is between two human beings – but there were a few giveaways that this was not a solemn occasion. Alison Hammond, officiating, struggled to keep it together as she called for those present to voice any “bones of contention” as to why Elizabeth Mary Francis Hoad and six-year-old Logan Humphrey the Second should not be wed. No one said the obvious – “How long have you got?” – but Logan did offer a Tim-from-The-Office-style haunted look to camera.

What would move a woman to marry her dog, even symbolically? Before the ceremony, Hoad, 49, told This Morning that after four failed engagements, 220 dates and a range of unsatisfactory experiences in the search for love – men concealing wives, men her age pursuing younger women – she had given up on the male of her species.

Logan, on the other hand, has been a constant in her life since she adopted him a year ago. “He’s saved me, and I’ve saved him. I was broken before I got him.” It wasn’t just her, Hoad said – many of her friends preferred the company of their dogs to men. She is not even the first woman to marry one.

Wilhelmina Morgan Callaghan, from Northern Ireland, her Yorkshire terrier, Henry, in 2009, because “dogs are better than men” and “I know I’m with Henry for life”. Lilly Smartelli, 55, of Phoenix, Arizona, told the New York Times earlier this year of her plans to wed Bernie, her poodle-cross, to know the joy of being married to her best friend before she died. Her only misgiving? The expense. “He’s always there for me. He listens, and he loves me no matter what. What more could a woman want?”

Dog ownership’s links to lower stress, less loneliness and better mental and physical health well established, Hoad’s chances of living happily ever after might indeed be higher with Logan than if she settled for some desultory date. A 2010 study found that women might benefit in particular. Conversely, earlier this year, Paul Dolan – a professor of behavioral science at the London School of Economics – asserted that marriage where women didn’t.

To even the score, Dolan wrote in response to the ensuing outrage, we “needed to start by caring less about what kinds of relationships other people choose to have, and how they live their lives. If they are not harming us, why should it matter?” One might put the point to This Morning. Tracey Emin famously married a rock “because it’s not going anywhere” – but a dog will actually love you back.