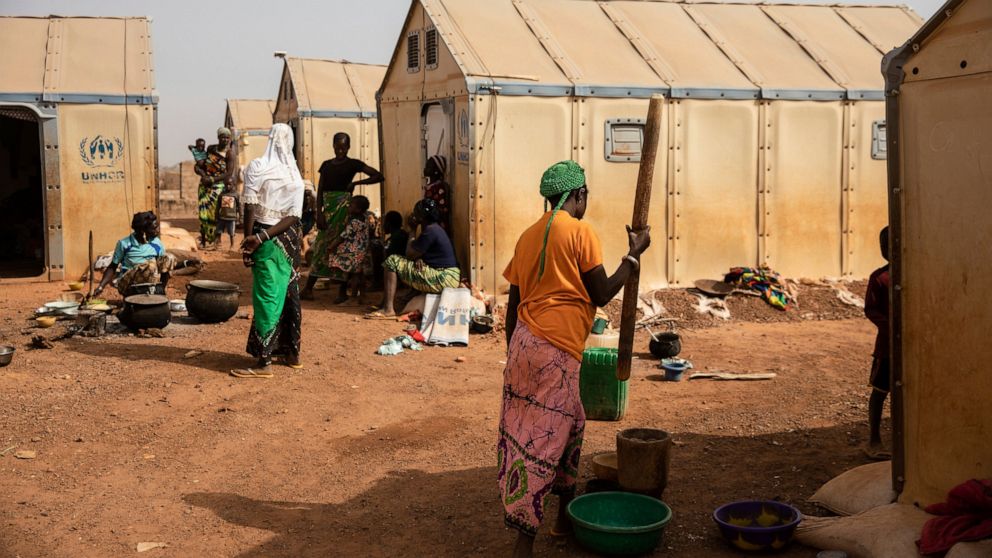 KAYA, Burkina Faso — A 20-year-old woman could no longer live in her village amid the rising violence caused by Islamic extremists. But she needed to return and retrieve the family’s cows in hopes of selling them.

If her husband went, jihadists would almost certainly kill him. She went instead, and was dragged into the bush, beaten and raped at knifepoint.

“I screamed, but I couldn’t overtake him, so I cried,” she recalled in a phone interview from Barsalogho town in the Center North region where she now lives. The Associated Press does not identify victims of sexual violence.

The extremist violence in Burkina Faso linked to al-Qaida and the Islamic State group is fueling an increase in sexual assaults against women, especially those displaced by attacks. Many are preyed upon as they attempt to collect belongings they left behind.

In Burkina Faso’s Center North region, sexual assault cases increased from two to 10 during a three-month period last year, according to a report by humanitarian groups including the United Nations. Some 85% of survivors were internally displaced people mainly living in makeshift camps in Barsalogho and Kaya towns, it said.

Women in Kaya told AP they feared being attacked while going to fetch firewood for cooking.

“I won’t go more than 4 kilometers (2.5 miles) outside of Kaya to farm because I’m afraid for my safety,” said Kotim Sawadogo. The 37-year-old fled Dablo in August and struggles to afford food for her four children. In September 2019, her niece was raped by jihadists while farming outside the village, she said.

“They won’t be killed but they’ll be raped, which is like being killed inside anyway,” said Fatimata Sawadogo, who was displaced last year from Dablo to Kaya and knows women who have been raped by jihadists while farming. Women often assume the rapists are jihadists because they carry guns and wear masks.

Sometimes after assaulting the women, the jihadists burn their food, and yet some women are so desperate that they return the next day to salvage it, she said.

Aid groups say jihadists are not the only perpetrators and that there has been an increase in domestic violence and exploitation of displaced women by host communities.

“This reality is made worse by the lack of economic opportunities for women, the shortage of food and shelter for women and the lack of access to quality health care,” said Jennifer Overton, West Africa regional director for Catholic Relief Services.

Earlier this month, a woman in Kaya said she had sex with a community leader twice, in June and November, because he promised he could add her name to a list to receive food. “I regret it, but I thought I’d get food and I never did,” she said, who spoke on condition of anonymity for her safety.

This year the humanitarian response plan for Burkina Faso estimates that more than 660,000 people will need protection against gender-based violence, Nebie said.

Since August, the organization has created six safe spaces in the Center North to help women and girls speak freely about their experiences, but it’s inadequate, she said. And some areas of the country like the Sahel and East regions are hard to access due to insecurity.

Local government officials say the daily influx of displaced people is straining resources and putting women at risk by forcing them to venture farther into the bush to collect wood for cooking.

“In the past, women could find resources two or three kilometers (one to two miles) away, but with the increasing number, they go farther and farther and it is very worrying,” said Saidou Wily, head of social welfare services in Barsalogho.

The government increased security around the town and is advising women not to go into the bush alone.

Yet mothers trying to feed their children say they have little choice.

Last year, a 40-year-old mother of seven was gang-raped at gunpoint by two masked men who dragged her into an abandoned farmhouse while she was trying to return to her town in the Sahel region to get food, she said.

Now living in Kaya, she’s too afraid to leave again, but she has no money to support her family.

“I think about it a lot and I don’t even know what I’m thinking about, I just cry,” she said. “It’s misery.”